As she is wont to do of a Tuesday afternoon, your correspondent was cruising the neighborhood yesterday, looking for a Tuesday spot to park., when she came across an unusual sight on Columbia Heights between Clark and Pineapple.

(I will now cease talking about myself in the third person.)

There were several vintage cars parked on Columbia, along with several unusually high traffic cones blocking off several spots. When I pulled up to take what looked to be an empty spot, I was told by a man supervising that the spots were being held for a movie shoot.

There were no signs posted, and there had not been in advance of the “shoot”; when I asked where they were, the man mumbled something unconvincing, as which point I pulled over on Pineapple to call the precinct to get some more info. 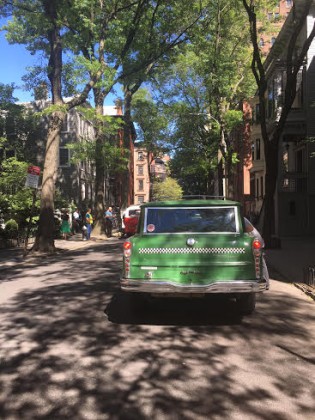 There were maybe a dozen or so people involved, some wearing yellow traffic vests and who were apparently there in some official capacity; others were in costume.

After trying to get through to the 84th four times without having anyone pick up (which really should be a whole separate post–this happens at the 84th ALL THE TIME), I called 311 and was quickly put through to the Mayor’s Office of Media and Broadcasting (or of Film, Theater, and Broadcasting), where the person who picked up the phone helpfully informed me that no permit had been issued for such a shoot and suggested I call the local precinct.

I finally got through (after pushing the selection for the detective squad) and was told that someone would come over to check it out.

This all took about 15 minutes, during which I was parked pretty much in the middle of their shoot and they moved the vintage vehicles around, down Columbia Heights and Pineapple. At one point, one of the men involved offered me one of their “reserved” spots. 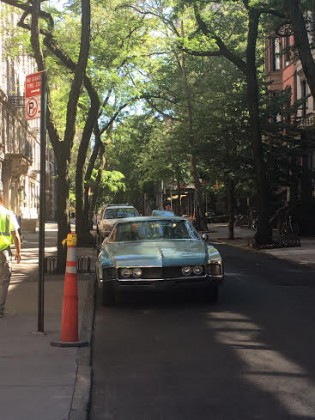 I didn’t stick around to see what happened next, though it did seem as though they were disbanding the shoot and they released the blocked parking spaces.

Did anyone else in the neighborhood have any experience with these folks or know who they are?