This is Steve Smith and Tommy Byrnes. They’re cousins and business partners. They’re great guys, down-to-earth, full of hope, with big dreams. If you met them, you’d want to have a Brooklyn Lager with them. Steve and Tommy, along with Joel Nearing, are co-founders of Jalapa Jar, and they want you to “Do Breakfast Like Texas.” 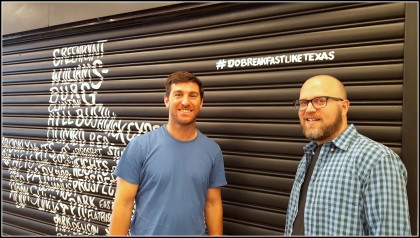 Austin, Texas to be exact – and in Austin, breakfast means tacos. That’s what they’ll be serving up at the kiosk inside the Clark St. station, slated to open later this month. Tommy shared how Jalapa Jar came to be, where they want to go with it, and why their first permanent location will be in our neighborhood.

BHB: How did you guys start Jalapa Jar?

Tommy: Joel was my childhood friend back in Texas, who went to culinary school in Austin, and perfected a salsa recipe that was always a huge hit with friends and family. Sometime in 2007, I asked Joel for the recipe and started making it to take to meetings and pot-lucks, and always got rave reviews. Last summer, I had just returned from London at my last job working in e-commerce. Steve had just left his career working in finance feeling burned out and unfulfilled by the work. We wanted to join our marketing and business skills and collaborate on a start-up venture. We tossed around some ideas during many a late-night brainstorming sessions over Joel’s salsa, when it occurred to us that marketing the salsa was something we could really be passionate about.

Tommy: We took the salsa to the Austin Hot Sauce Festival, which attracts about 15,000 people, to test it out for the masses. We hadn’t officially launched the business yet. So we rented out an Airbnb, had a huge house party, gave out samples of the salsa, and got great feedback. Back here in Brooklyn this past October, we entered Smorgsburg and started selling jars of the salsa. We’d start setting up at 7:00 a.m. and saw that nobody was selling any breakfast food. We always sold our salsa as being not just a dip for chips, but as a condiment to put on other foods. So we came up with the idea to sell breakfast tacos to go with our salsa and enlisted another cousin, Ryan Smith, who was a chef at the time to work with us. Breakfast tacos are a staple in Austin, with high-end restaurants to food trucks at gas stations all serving them, and we thought it was time to bring them to New York. We also got our jars in The Brooklyn Kitchen just in time for Superbowl weekend and it did great. 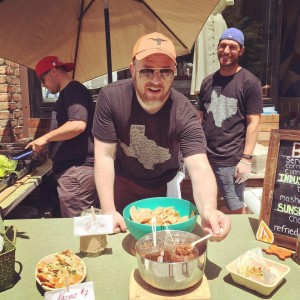 Ryan, Tommy, and Steve at Smorgasburg

BHB: Why did you decide to open your first permanent location in Brooklyn Heights?

Tommy: When Steve and I came up with the idea for Jalapa Jar, we were subletting an apartment on Clinton St. We’re very proud that we developed the idea not far from Brooklyn Borough Hall and in Brooklyn Heights, which we love. We chose the spot in the Clark St. station after seeing the “for rent” sign at the kiosk and approaching the landlord. The rent was affordable for a start-up business and it would also be a test for whether we can be a business that draws people to the location, as opposed to Smorgasburg which has built-in crowds. The foot traffic at the subway station and the college dorm next door were also selling points. We knew from establishments like Jack the Horse Tavern and Noodle Pudding that places serving good food can survive a long time in the immediate area, and we thought the area could use a carry-and-go food option too. We’ve had great feedback since we painted the kiosk gate. People are saying they’re happy something is finally going in there and they hope it’s something good. We hope to succeed here and open other locations.

BHB: How did you come up with the name Jalapa Jar?

Tommy: Our salsa is all about the jalapeno peppers that we roast on an open flame. This gives a natural heat to blend perfectly with the cilantro, cumin, and tomatoes, and allows the other flavors to be a part of the show. The name Jalapa comes from a small city in Veracruz, Mexico that the pepper is named after. People from the city were actually called “Jalapenos.” We liked the alliteration of the name to go with the word “jar.” We’re making Tex-Mex food, not Mexican, but we also wanted to pay homage to the country, and want to be sure that we’re not just appropriating another culture’s food, but celebrating it. 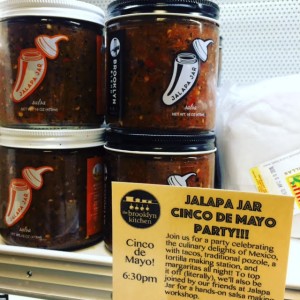 BHB: What menu items should we expect to see?

Tommy: Breakfast tacos, of course. We start with eggs and you can build your own, or choose one of a number of options, including one with bacon, jalapeno, and garlic mashed potatoes, and another with chorizo and refried beans. There will be a flour tortilla option and a corn tortilla, which is gluten-free. We’ll serve cold and hot brewed coffee using our favorite beans from Summer Moon in Austin. They roast their beans over an oak wood fire that makes it taste really unique. We’ll also have a dessert we call “sweet sticks,” which is mashed plantains with a hint of jalapenos, rolled tight in a tortilla, and dusted with brown sugar and maple syrup. We’d love to see our customers grab a breakfast taco or sweet stick and take them to the promenade for a stroll.

BHB: When will you open and what will your hours be?

Tommy: We plan to have a soft opening by the end of June, and open from 6:00 a.m. to 7:00 p.m. through the summer. By fall, we hope to stay open later with some late-night food options.

BHB: For the college kids next door with late-night munchies?

Tommy: Exactly, I was a college kid once too.

Let’s give Jalapa Jar a big Brooklyn Heights welcome and wish them a Texas-sized success.

For more info on Jalapa Jar, click here. To get a preview of the tacos and salsa at pop-up locations in June, click here.