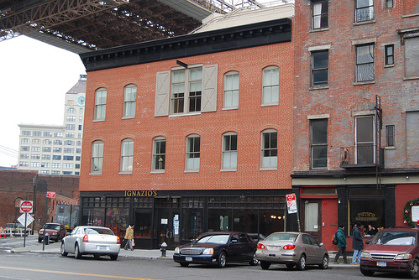 When Ignazio’s pizzeria opens next week beneath the Brooklyn Bridge, many Brooklynites envision some sort of smackdown with its neighbor, the legendary Grimaldi’s, which is right around the corner.

But Ignazio’s owner, Louis Termini, won’t have any of it.

“I’m not a rival — I’m a friendly neighbor,” Termini said, smiling through his thick, long beard at the to-be hotspot, which is at 4 Water St. “They’re a landmark, and I’m the new kid on the block.”

The restaurant is named for Termini’s father, and will serve classic pizzas, specialty pizzas, and drinks from local breweries and wineries. Termini said on Monday that he will open next Monday or Tuesday.

In the last few months, Termini has been hard at work — he installed a specialty pizza oven that is gas-operated, but heats the pizza as if it were a wood-burning oven. There will be the classic pizzas with fresh, locally made mozzarella, as well as more adventurous toppings like swiss chard, smoked eel, seaweed and seafood.

Termini learned how to make pizza from his Italian grandmother, and has operated seven other pizzerias in Connecticut. But he grew up eating pizza every afternoon in Bensonhurst, and knew it was time to come back to Brooklyn.

And he will have live music on most nights on a small stage.

The bottom line? Termini is here to “help” Grimaldi’s, he said. The long lines keep locals away from the popular pizzeria, and a second restaurant down the street should keep everyone happy.

The restaurant, which sits on Water Street directly underneath the Brooklyn Bridge overpass, has a full panoramic view from the Statue of Liberty to the Empire State Building, with the skyline of Lower Manhattan and the East River in between. Termini is putting the finishing touches on the space, which has solid wood paneling with copper finishes.

For their part, the boys at Grimaldi’s said they are happy with the arrangement.

“We have no competition — there’s room for everybody,” said area manager John Boyle, noting that Termini eats regularly at their shop, and that everyone can be friends.