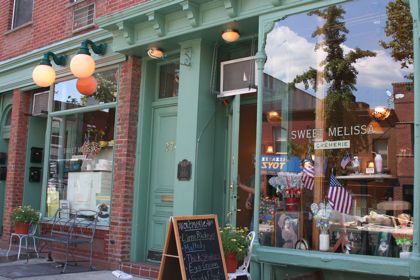 Sweet Melissa’s Patisserie may be moving into the neighborhood by early summer — and taking over the former Busy Chef and Blue Pig spots at 60 Henry St.

Owner Melissa Murphy told the Brooklyn Heights Blog today that she’s always wanted to open in Brooklyn Heights, and that she’s had her eye on that corner at Cranberry Street for a while. She’s even scouting potential investors to help her with the expansion, she said.

“We’re trying to see if something’s possible,” Murphy said. “We’re really acting as if it’s going to happen, and we’re hoping that the universe helps us figure it out.”

There are two other Sweet Melissa’s in Brooklyn — one at 276 Court St. in Cobble Hill and one at 175 Seventh Ave. in Park Slope. The patisserie is best known for its cakes and other confections, all of which Murphy creates herself. Last spring, she opened an ice cream shop and sundae bar, and she said she wants to open a second creamery in the former Blue Pig spot.

As for the timing, Murphy said she hopes something can happen by early summer, depending on how negotiations go.

And, for the record, former Busy Chef partner Alan Young is still involved in the storefronts, but Murphy said she is in talks with him to fully take over the space.

“We’re looking for a deal that works for both of us so that Alan Young doesn’t need to be involved in the space any longer,” she explained.