Last Wednesday evening your correspondent went on a tour through Brooklyn Bridge Park of “Brooklyn’s Waterfront History” led by Julie Golia (photo), a Columbia history PhD and Director of Public History for the Brooklyn Historical Society. Julie described the transformation of the Brooklyn waterfront over the years, from natural shoreline up until the early nineteenth century, when it began to be developed for commercial use. By the mid nineteenth century, Brooklyn became known as “the walled city” (it was a separate city then) because of the phalanx of tall warehouses and industrial buildings that lined the waterfront from Williamsburg down to Red Hook. The warehouses below Brooklyn Heights that extended up to just below the level of today’s Promenade were gone by the time the BQE and Promenade were built, though new warehouses were built on larger piers that continued to be active until 1983. 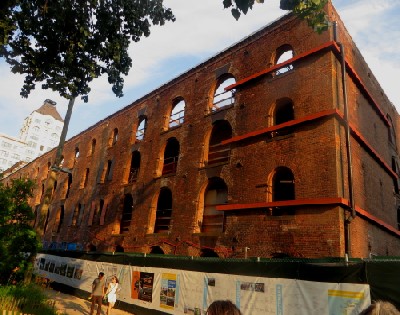 One survivor of the nineteenth century is the Empire Stores building, in the Fulton Ferry Historic District, the southern part (photo) of which was completed in 1885; a northern portion was added in 1889. Empire Stores is now being developed for adaptive re-use as stores, restaurants, and offices. Julie told us that the Brooklyn Historical Society will have an annex there, providing additional space for historic exhibits. 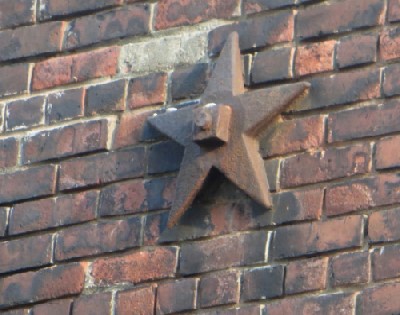 Someone asked about the metal stars on the wall of the Empire Stores. Julie said these were used on the ends of metal cross-beams in nineteenth century buildings to secure them to the walls. 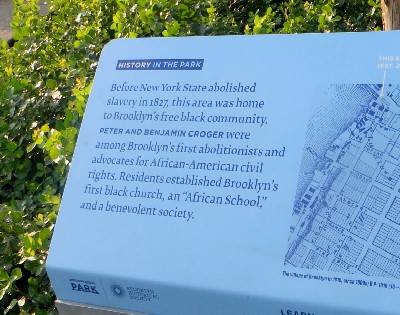 Julie said that new construction displacing established communities was not a new thing. The building of the Brooklyn Bridge’s Brooklyn abutment in the 1880s destroyed what had, since at least the early nineteenth century and perhaps earlier, been a thriving African American community. There are several of these historical signs throughout the park, provide jointly by the Park and by BHS. 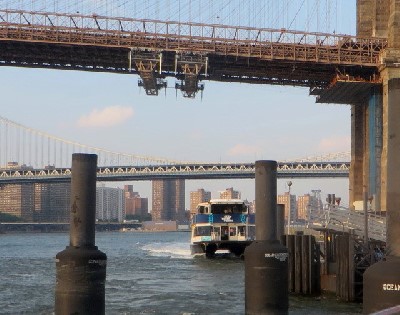 The Brooklyn Bridge did not kill ferry service. The Bridge was completed in 1883, but steam ferry service continued from lower Manhattan to Fulton Ferry Landing until the early 1900s. What stopped it then was the subway. Now ferry service is back, mostly serving different routes and carrying more tourists than commuters (though your correspondent has found it handy on occasion). 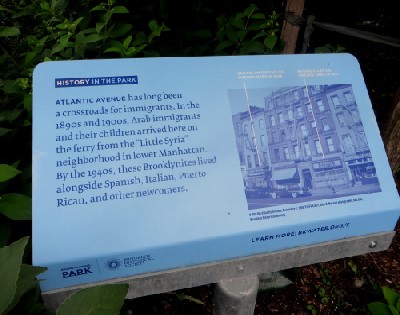 Our tour ended near the foot of Atlantic Avenue, on the landward side of Pier Six. Julie pointed to this sign, which commemorates Atlantic Avenue’s role as a “crossroads for immigrants.”

There are more Wednesday Night Tours coming up in Brooklyn Bridge Park, starting with “Natives and Newcomers” (about the early Dutch settlers and the Native Americans) this Wednesday, July 8. There’s a schedule here.