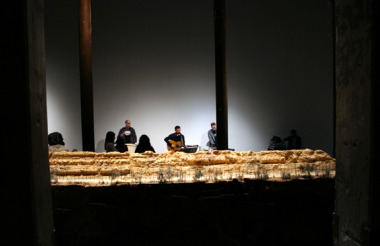 When I first walked into Smack Mellon Gallery in DUMBO last Thursday night, for its Press Play Series, I saw a wall.  For a second, I wondered if I had gotten the date wrong.  I wondered if the gallery was still working on the installation.  The bisected cavernous space looked completely different.  And of course that was the point.  I was looking at, confronted by Blane De St. Croix’s installation, Broken Landscape.  It is an almost literal rendering of the Mexico/US border, over eighty feet in length, in the main gallery— but monumentally miniaturized.  The wall itself is chest high, perhaps a foot wide.

Reaching down from the wall, as if a giant knife has sliced through the earth, the piece reveals the underlying geological stratum as neatly and as scientifically as a textbook.  The terrain is haunted.  It is devoid of human habitation.  The border is a ghost town.  On the one hand, it is an intimate portrait of the unfriendly, almost menacing topography of this region, and on the other, a charged political statement.  The end of the wall is a bisected overpass of a highway that begins and ends in mid-air.  At its source, the border resembles the badlands, an almost primeval landscape.  It evolves into civilization, the floating highway— yet both look dangerous.

In the smaller gallery is Carlos Motta’s, The Good Life.  This is an installation with a multi-channel presentation with 12 monitors mounted on a four part two tiered wooden structure.  From his notes, this structure references, “the theater and general space of the Athenian Agora, in which citizens were entitled to meet, debate and participate in legislative decisions.”  When I walked into this space, another confrontation— but this time, highly populated and very vocal.  The artist interviewed pedestrians on the streets of South American cities between 2005-2008 on democracy, US involvement in their countries, and the idea of leadership.  In particular, a man spoke about the horrible conditions of a local hospital.  He talked about the flies that kept landing on his mother.  Another woman suggested the US government sticks its nose where it doesn’t belong.

As I peered across the divide, past the badlands, the music began.  Nutria NN is the stage name of Christian Torres-Roje.  Technically, Chilean folk rock, but obviously fused with other cultures and styles. It was harmonic, subdued, poignant— a fitting and apt counterpart to the installations.  Once again, Smack Mellon has succeeded in curating an evening of music and art that not only reference each other, but illuminate and enrich. Once again, superior, locally brewed Kelso beer was on hand (free), and this time, now March, it was warm enough to walk home.  Excellent.

The exhibit runs through April 12th.  The Press Play Concert Series is the first Thursday of the month.