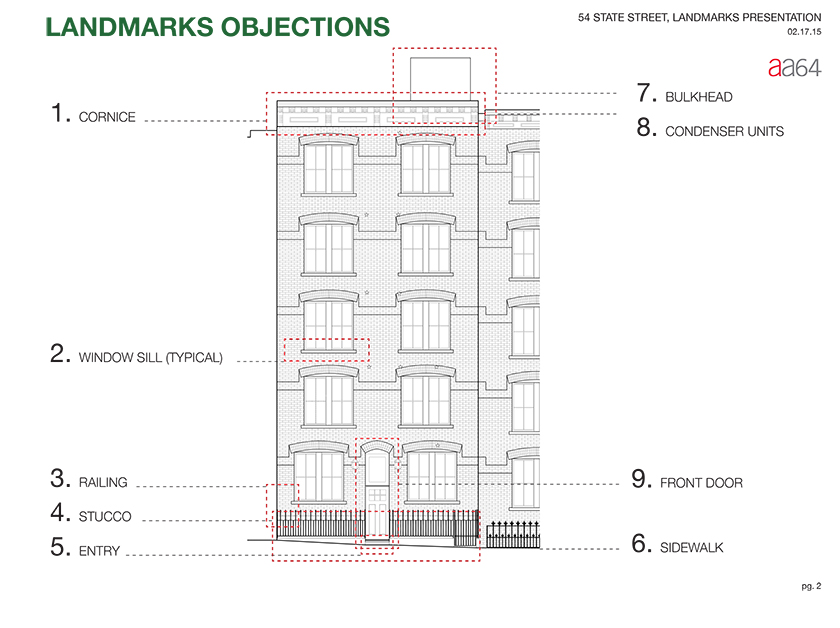 Over the years, much work has been done on the apartment building at 54 State Street, including partial demolition, without the approval of the city’s Landmarks Preservation Commission. Don’t forget, Brooklyn Heights was the first neighborhood to be designated a historic district by the LPC. On Tuesday, the commissioners took action to legalize and otherwise rectify that work. The proposal came from Atelier Architecture 64, which is based in Brooklyn. 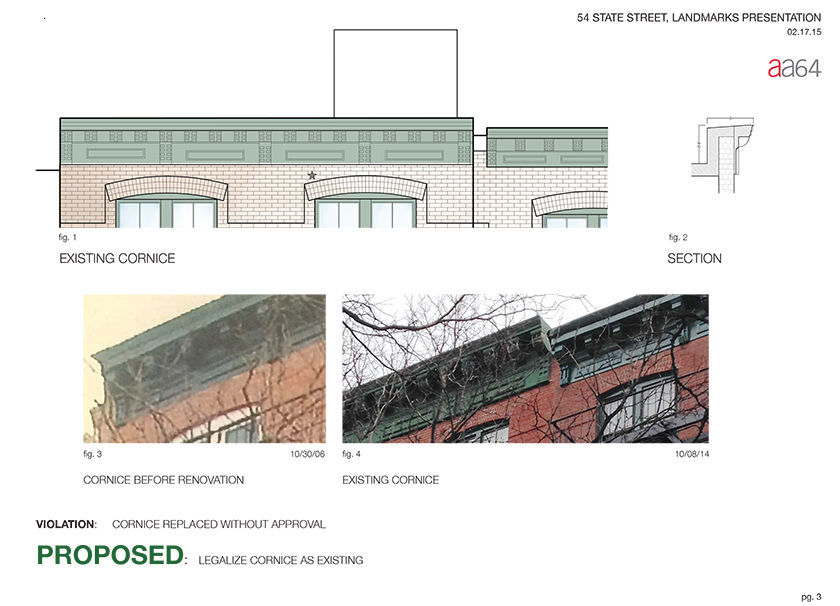 The first item was the cornice, which was replaced without LPC approval. The proposal was to simply legalize the existing cornice and eventually apply for permission to restore the original cornice. The commissioners decided that the applicant should just do that now. 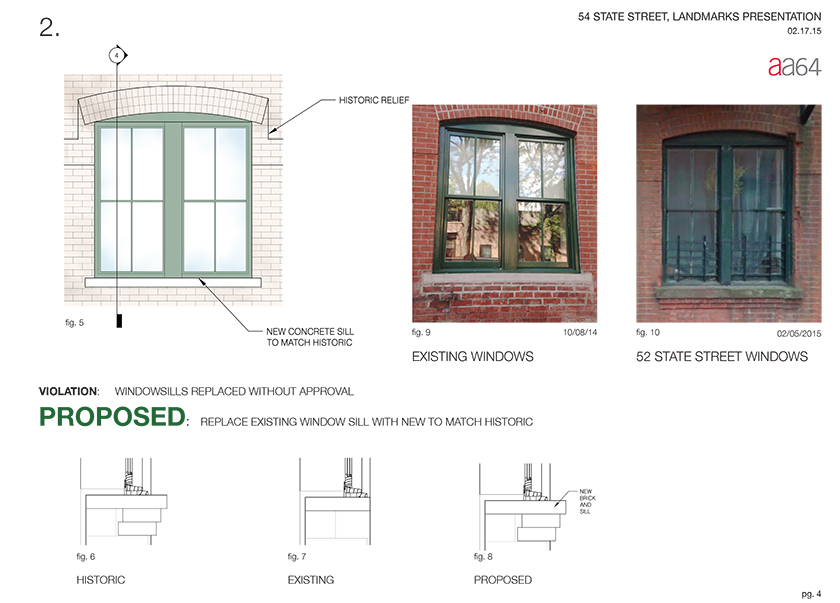 The second item was the windowsills. The proposal to replace the existing sills with new ones to match the historic sills was approved. 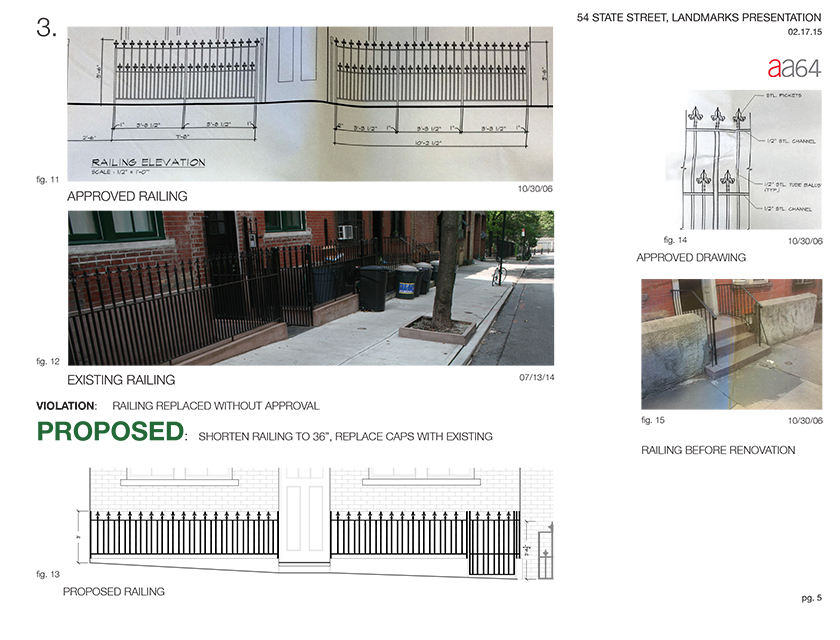 The third item is the railing/fence in front of the building. The LPC had approved a two-tiered design back in 2006, but that isn’t what was built. The proposal was to lower them to 36 inches, which would be more like the neighboring building, and cap them with the existing caps. That was approved. 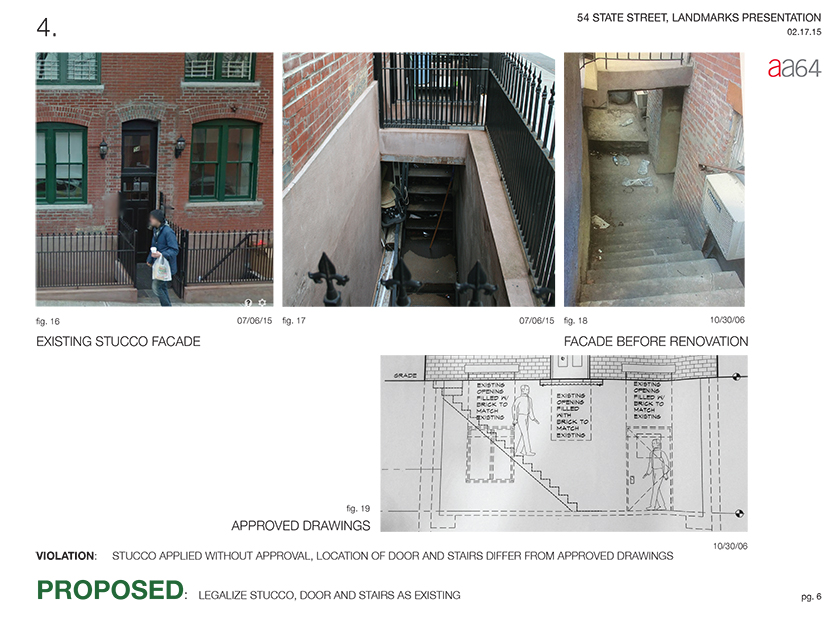 Windows at the cellar level were infilled and then covered and stucco was applied without LPC approval. Also, the doors and stairs were not constructed as approved. The proposal was to simply legalize the existing conditions. Instead the LPC ordered that the stucco be removed. That will require probing to find out what is behind it at this point. 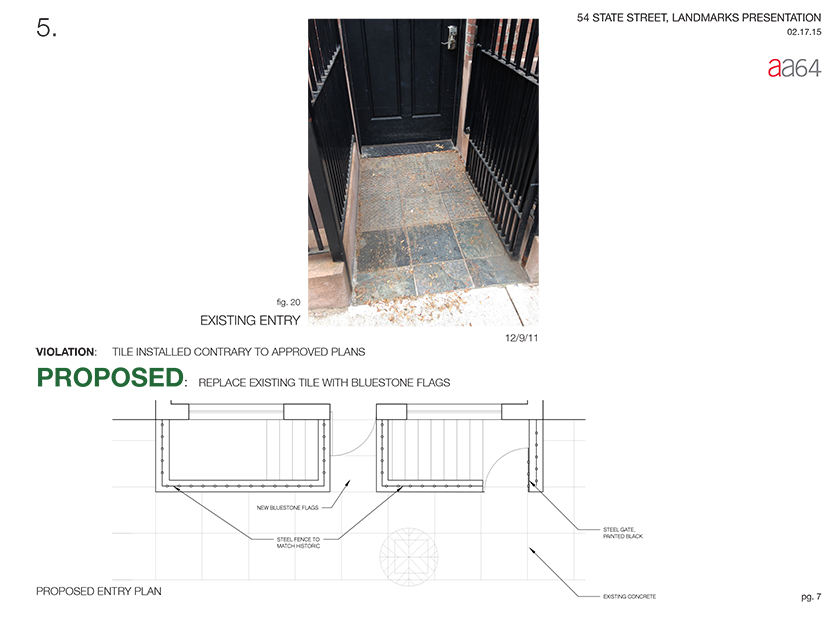 Tiles were installed in front of the entryway that differed from approved plans. The proposal to replace the tile with bluestone was approved. 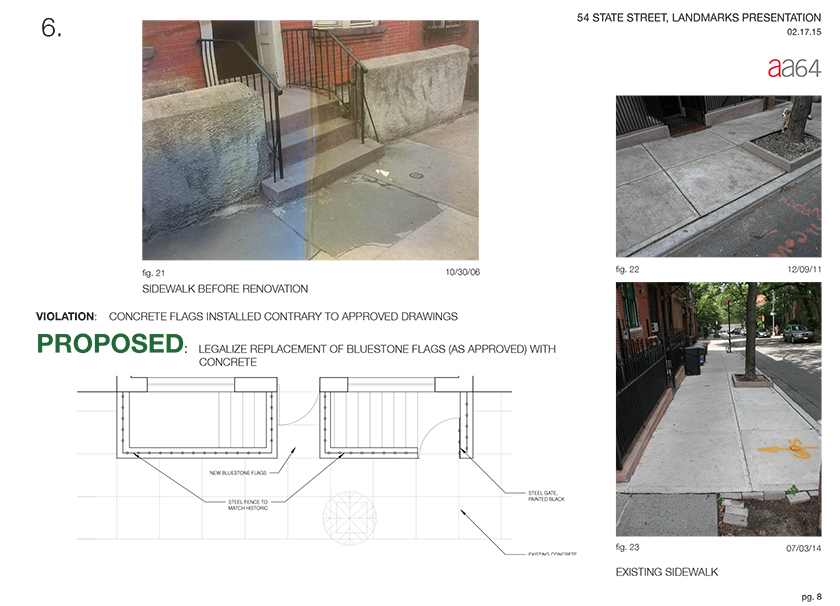 The sidewalk concrete flags were also installed contrary to approved plans. The sidewalk will be replaced with concrete tinted to match the bluestone. 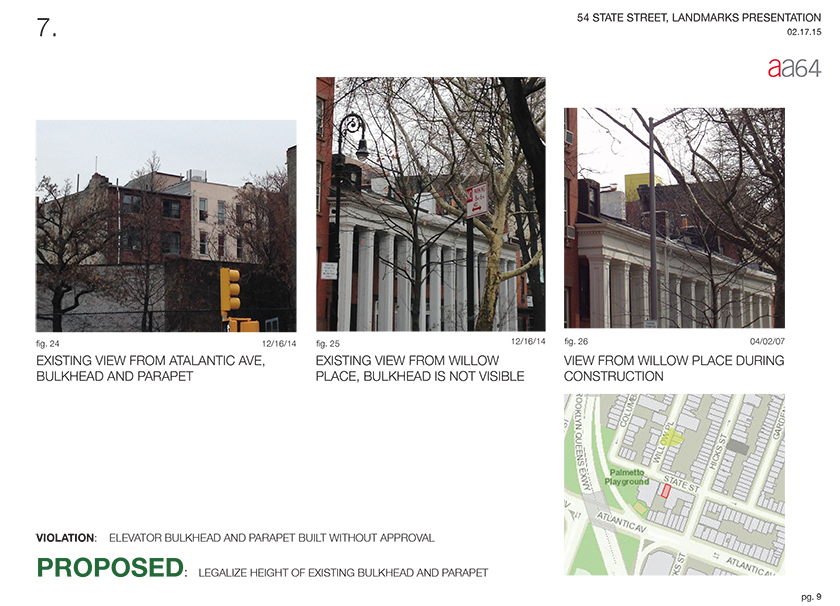 An elevator bulkhead and parapet were also constructed without approval. The proposal was to legalize it. It will be reviewed at the staff level. 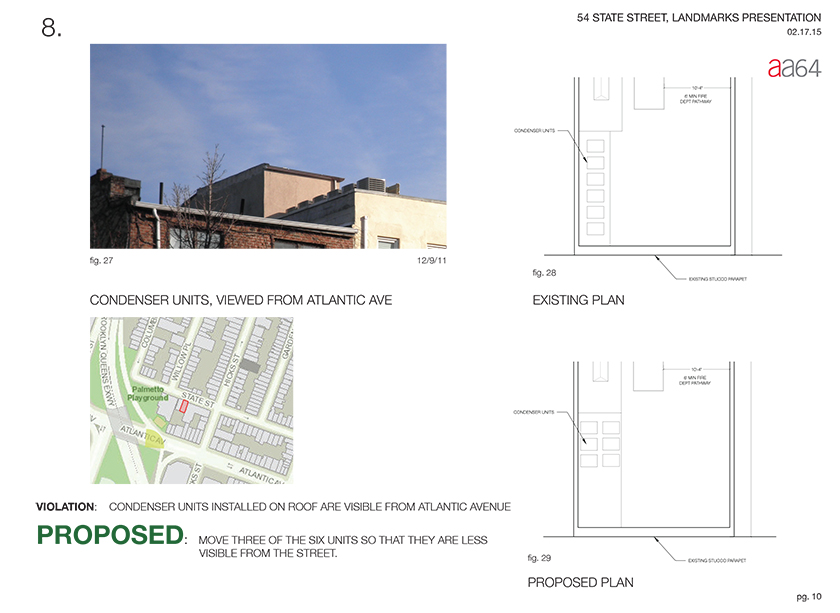 There are six condenser units on the roof that are visible from Atlantic Avenue. Three of them will be relocated to reduce visibility. 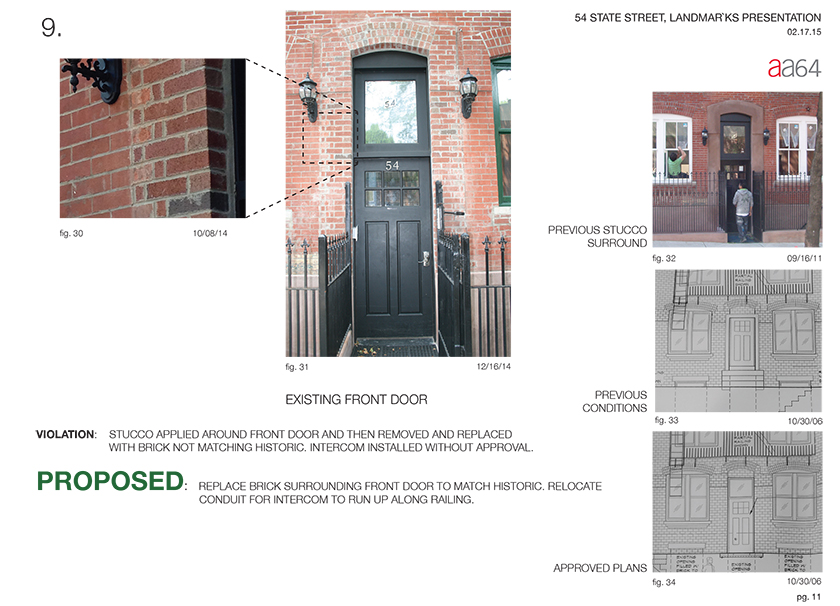 Finally, stucco which had previously surrounded the front door was removed and replaced with brick not matching the historic material. Also, a intercom was installed without approval. New brick will be installed that matches historic material and the intercom will be relocated to the railing.

Judy Stanton of the Brooklyn Heights Association supported many elements of the proposals, but, like the commissioners wanted the cornice restored and the stucco removed from the base. Barbara Zay of the Historic Districts Council also spoke. “The smooth brick stretchers and thin mortar joints are an important feature of this building, so our committee asks that the applicant work with staff to match the historic brick pattern,” she said. 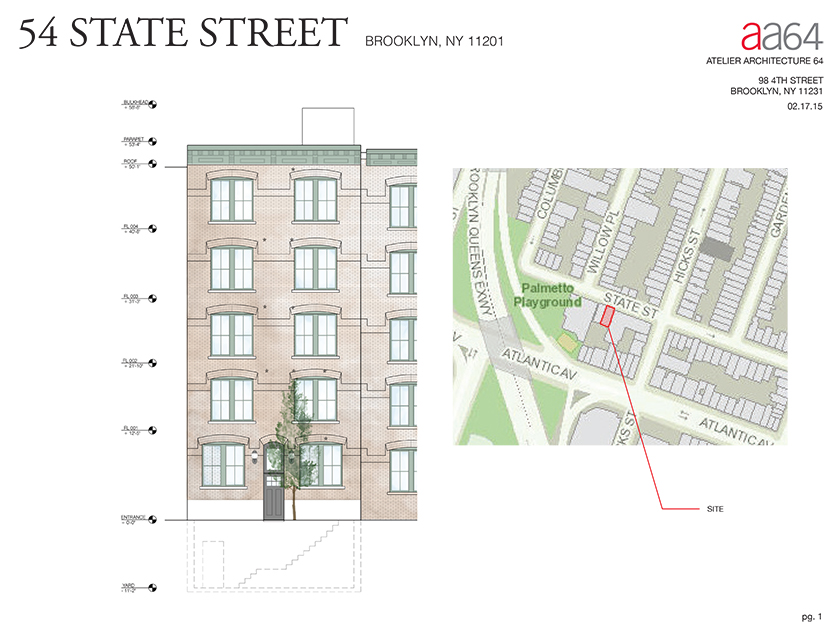 Remember, Brooklyn Heights residents. Most of you live in a historic district. If you do anything to the outside of your building, you have to get approval from the LPC.

Evan Bindelglass is a local freelance journalist, photographer, cinephile, and foodie. You can e-mail him, follow him on Twitter @evabin, or check out his personal blog.