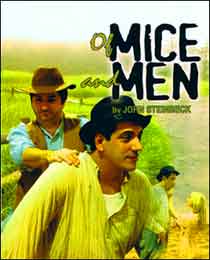 On Friday February 2 at 8PM the curtain will rise on the Heights Players' presentation of John Steinbeck's Of Mice and Men.

Steinbeck based Of Mice and Men upon his real life experiences on the road in the 1920s. "Lennie was a real person… He's in an insane asylum in California right now. I worked alongside him for many weeks. He didn't kill a girl. He killed a ranch foreman. Got sore because the boss had fired his pal and stuck a pitchfork right through his stomach,"  he says in the introduction to the Penguin edition of the play.

The production is directed by Jim McNulty and stars Heights Players vet Bernard Bosio as alpha dog George and newcomer Val Balaj as his simple sidekick Lennie. Full cast information is available on the stage company's website. The production runs through February 17.  For showtimes and information call 718-237-2752.