20 Henry Street on the Block

By Homer Fink on January 24, 2007 10:58 am in Brooklyn Heights, Landmark Preservation, Real Estate 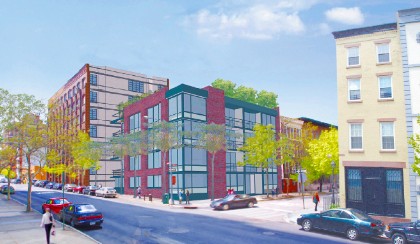 The Brooklyn Daily Eagle reports today that after all the drama surrounding the development of 20 Henry Street, the property has been put on the market for $22.5 million.

The photo here shows the Landmarks approved four story building proposed to be built upon the building's garden area.

Outstanding residential development opportunity with potential for rentals or condominiums. Vacant 7 story 45,990 sq ft loft building with a residential certificate of occupancy and landmark approval to construct a 4 story 14,500 sq ft residential building on the vacant land adjacent to the existing building. The property is located on an extremely desirable blockfront in the Landmark Historic District of Brooklyn Heights. The blockfront property offers 201 feet of frontage on Henry Street, with approximately 62 feet of frontage on Popular Street, and 65 feet of frontage on Middagh Street Short walk to the 2 and 3 trains at Clark Street, the A and C trains at High Street, and the entrance to the pedestrian path on the Brooklyn Bridge. The property is a few short blocks from Brooklyn Bridge park and Dumbo. Great access to all the retail and cultural amenities that Brooklyn Heights has to offer. Asking Price: $22,500,000

“We’re asking $22.5 million,” said Brian Leary, a partner and broker with Massey Knakal Realty Services, who is representing the sellers.

“And there has been a tremendous amount of interest both from local developers as well as national ones,” he added.

The controversial property, known as the Peaks Mason Mints “candy factory,” was a former Mitchell-Lama building containing artist loft studios that went through a buyout in 2003. The new owners, The Praedium Group, identified as 20 Henry Street Associates LLC, did not renew tenants’ leases and forced them out with stated plans to convert the existing 43-unit seven-story building to luxury condos, in addition to doing away with the adjacent sculpture garden in favor of a nine-story building.