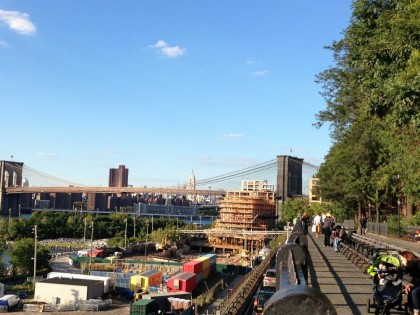 Brownstoner reports on the battle over the height of Toll Brothers Pierhouse condos and hotel now in construction at Pier 1.

This latest dispute about the Park has raised the ire of two of Brooklyn Heights most beloved and passionate community activists, Otis Pratt Pearsall and Martin Schneider.

At issue: the height of the new building and whether it violates either the spirit or the letter of a 2005 agreement that sought to preserve views of the Brooklyn Bridge from the Brooklyn Heights Promenade. In the opinion of preservationist Otis Pratt Pearsall and the Brooklyn Heights Association, it does. Park management has another take.

Now Pearsall and the BHA have cried “foul” because a three-story addition on the Pierhouse—which will contain a bar as well as mechanical and elevator equipment—is clearly visible crowning the hotel portion of the Pierhouse.

According to Mr. Pearsall, the most revered preservationist in Brooklyn, the 30 foot high addition “bifurcates” the view of the Brooklyn Bridge from the Promenade.

Martin Schneider, another greatly respected Brooklyn Heights’ voice, also weighed in about this latest dispute over BBP, which Brownstoner described as “another tempest (you decide if it’s in a teacup)”:

This article in today’s Brownstoner effectively summarizes and illustrates the issue over the projected height of the still under-construction Pierhouse at Pier One in the Brooklyn Bridge Park.

Despite the struggle to hold down the height of the building which Otis Pearsall engaged in nine years ago, it appears that this world class view of the great Brooklyn Bridge is about to be seriously compromised.

Exactly why that is happening remains to be revealed. Likewise, whether it can be rolled back is up in the air.

But this concise article sets the issue forth with impact. Hopefully, other media will pick up on it and with the help of an informed concerned citizenry, it will yet be stopped.