Speaking at a rally and press conference early this afternoon outside Long Island College Hospital called by the New York State Nurses Association, New York City Comptroller Scott Stringer (photo, with Democratic State Assembly Candidate Jo Anne Simon) characterized SUNY’s actions with regard to LICH as “nothing sort of disgraaceful.” He said there is a need to look carefully at healthcare needs throughout the city, and that there must be much greater transparency about heath care finances. This inspired those attending to chant, “Open the books!” Mr. Stringer joined the chorus. 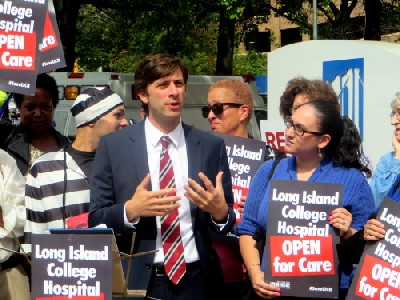 City Council Member Steve Levin also used a “D” word, saying the handling of LICH was “disgusting.” He praised those present, and the affected communities at large, for not giving up the fight to keep needed services open at LICH. 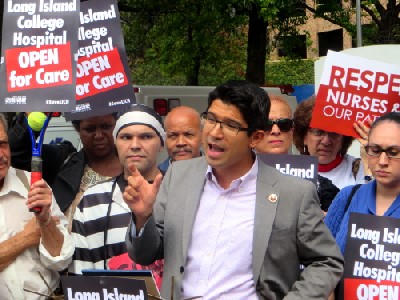 Another Council Member, Carlos Menchaca, whose district includes Red Hook, noted that his district includes the largest public housing complex in Brooklyn, and said one death, of a resident of that housing, could be attributed to the lack of ambulance service at LICH. 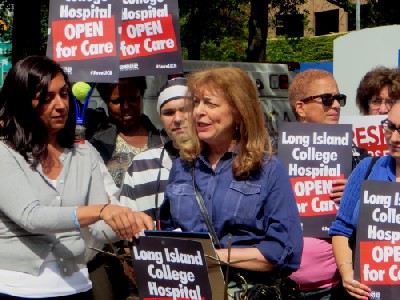 Brooklyn Heights resident Trudy Wassner spoke on behalf of Patients for LICH. She said she had been hospitalized there and, while recovering, looked out her hospital room window at the Statue of Liberty and thought, “What a good way to get well.” Shortly after she was discharged, she read that LICH was being closed. “It hit me then,” she said, “that the reason it was being closed is that view I had of the Statue of Liberty.”

Others who spoke included Ms. Simon and a representative of Congresswoman Nydia Velazquez, both of whom support the community’s efforts.