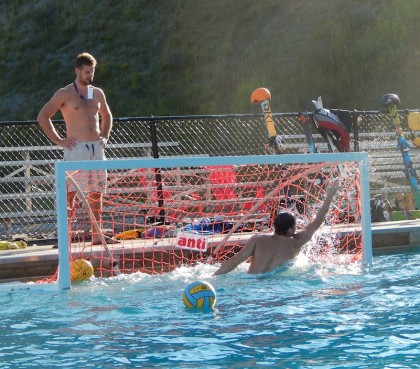 By brooklynheightsblog on September 5, 2014 8:42 pm in Brooklyn Heights, Sports

Less than a year ago the St. Francis Men’s water polo team delivered perhaps their finest performance of the season in beating Princeton University 11-9 to capture their second-straight College Water Polo Association (CWPA) championship and advance to the NCAA Men’s Water Polo Tournament for the send year in a row.

A lot has changed since the Terriers big win last November 24 at Brown University.

But—as they say—the more things change, the more they stay the same. Tomorrow in the DeNunzio Pool St. Francis will open the defense of its 2013 Eastern title against Princeton in the Princeton Invitational

St. Francis is the country’s 12th ranked team, according to the CWPA’s 2014 Men’s Varsity Preseason Poll, the highest ranking for any Eastern squad. Right behind the Terriers at #13 are the Tigers.

So it’s fitting that the East’s two best squads face off in their respective seasons opening matches in what might be a preview of the 2014 Eastern championship.

While St. Francis’ roster has undergone a significant turnover, the 2014 squad returns three of the team’s top four scorers, including seniors Vuk Vujosevic (51 goals, 24 assists) and Lazar Komadinic (48 goals, 19 assists) as well as sophomore Ilya Djuretic (46 goals, 11assists). The Terriers will likely need all the offensive firepower they can muster to compensate for Mladenovic’s absence in goal.

Newcomer Bora Dimitrov, a Serbian who played the last two years for Diablo Valley Junior College outside of San Francisco, will look to provide offense at center lost with Stankovic’s graduation.

“It’s going to be hard to replace Bosko,” acknowledged St. Francis coach Mihaljevic. “But we did bring in a new center who has a similar type of skill set as Bosko, so I expect him to slide into [Bosko’s] slot and provide us that kick in the offense.”

There’s no question that goal is the primary question mark for the Terriers this season.

Aleksandar Gavric, Mladenovic’s understudy in 2013, has the inside track to start at Princeton tomorrow. But given last year’s 2-3 record Gavric will be pressed by newcomer Nikola Zivkovic and red-shirt sophomore Zack Cleveland.

Coach Mihaljevic was blunt in assessing his team’s goalkeeping situation.

“We don’t have Igor and there’s no point in living in the past,” said Mihaljevic, now in his second year as Terriers coach. “We have three goalies on the roster, two of them are coming back, one red-shirt, [the other] the back-up goalie from last year. They’re not Igor, but they’re definitely good, solid goalies. We put them in the rotation, test them out and see what we get from them.”

Princeton, hoping to return to the NCAA tournament for the first time since 2011, has a lot to play for tomorrow but their coach downplayed the significance of the match-up with his squad’s main rival.

“We’re looking forward to our season opener against St. Francis,” said Tiger head coach Luis Nicolao. “Obviously last season ended in a tough loss in the championship game, but we return a good nucleus of guys.”

“Its a new year and a new team and… it should be a good early test for our team.”

The Terrier coach also sought to downplay expectations in the first of what could be 30 matches for his team.

“It’s Princeton at Princeton, but it’s just another game,” said Mihaljevic “It’s the first game of the season, but it won’t make or break us”

“I just want to see our guys fight, no matter what the score is, until the very end.”