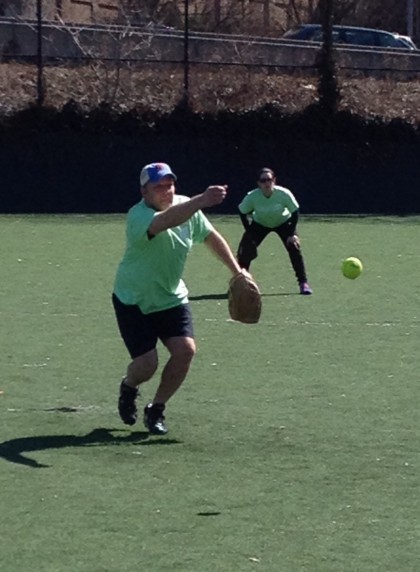 By brooklynheightsblog on September 6, 2014 7:18 am in Brooklyn Heights, Sports

Yes, sports fans, it’s true: the Yankees #2 man (sorry, no one can ever supplant the immortal Babe!) will celebrate his imminent retirement tomorrow.

You could pay your respects at the Stadium [Tickets range from $90 to $3,562 on StubHub] and sit passively as “El Capitán” receives an assortment of inane gifts [How many remember that the Yankees gave Phil Rizzuto a cow when his number was retired? Where is that cow now?].

Or, you could do what Jetes does: play. And “The Commish”—Tony Lacitignola—has just the thing for you, frustrated athlete who works too much: The Brooklyn Heights Athletic Club Coed Adult Softball League.

Opening Day for the league is tomorrow at 10 a.m. in Brooklyn Heights’ own Van Vorhees Park. For those few who haven’t yet joined the fun, the first day is a way for Commissioner Lacitignola to evaluate his rosters, checking out hot prospects so as to balance each team’s talent for optimal competition.

Games are Sunday mornings in the fall and spring starting at 9:30 a.m.–not much of a commitment if you think about how hard “our guy” worked to come all the way back from that terrible ankle injury in 2012.

According to Lacitignola, his league, now in its 25th year is “fun, it’s friendly, it’s for all those over-the-hill athletes or those soon to be who can’t get the idea of competing out of their systems.”

“Our league has players from their 20’s to their 60’s,” said Lacitignola. “We have teachers, business people, cops, fireman, artists, movie makers, cooks and bottle washers.”

Most important it’s coed, so nobody’s gonna get all jerky out there [like that Canseco guy who tried to ruin baseball]. The Commish strives to keep couples together [unless they don’t want to].

$120 gets you on a team and includes team shirts, balls, umps, field permits, and a league party at season’s end.

Don’t just take Tony’s word on this: Jason Harvey—when he’s not pumping out commercials, music videos and corporate films for clients—has been pumping out batters at Van Vorhees for many years.

“This is a great league. I’ve been playing in it for at least 9 years now and every season is memorable. You can play positions you are comfortable with or challenge yourself at a new one. It’s a hitters league, so you always feel pretty good about your skills.”

In summing up the league’s spirit of camaraderie—which the Yankee Captain would surely appreciate—Harvey said: “I’ve made good friends on every team I’ve been on and have brought in some of my own who also love it.”

Or just show up tomorrow at Van Vorhees Park tomorrow ready to play. You KNOW it’s what Jetes would want you to do!

SFC Water Polo Opens Defense of 2013 Eastern Title Saturday at Princeton
What Do You Think About Racked’s Recommendations for a ‘Perfect Saturday’ in Brooklyn Heights?