Conventional wisdom has it that people in Brooklyn Heights who wear “preppy,” “WASPy,” “Ivy League” clothing all work in Manhattan and do their clothes shopping at Brooks Brothers or Paul Stuart or by mail order from L.L. Bean. C.W. has again been proved right. Just over four years ago we welcomed J. McLaughlin to a space on Hicks Street between Montague and Remsen.

Update: A spokesperson for the chain tells BHB, “The store does not have plans to close this weekend. J.McLaughlin has decided not to renew their lease on the space and we hope to remain open until the end of the year.”

Bargains await at their current sale.

I’ll confess to having been impressed by their slightly off-beat take on prep classics; for example, horizontal wale corduroy pants. A couple of months ago I took advantage of a sale to buy a rep stripe tie that duplicated, in pattern and width, one that was popular during my mid-1960s college days. 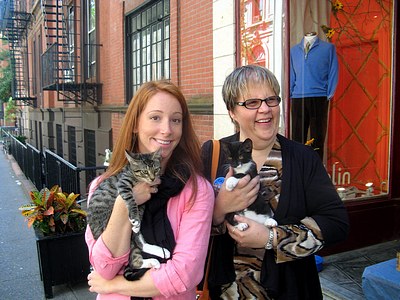 I will especially miss comely Cape Cod native and store manager Lauren, shown in the photo above on the left, holding a kitten she adopted from a Brooklyn Bridge Animal Welfare Coalition event held outside the store in September of 2012.