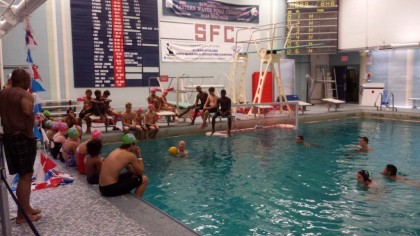 This past Sunday in the St. Francis Brooklyn pool at the Pope Athletic Complex, Borough President Eric Adams—who has made youth sports a focus of his administration—joined elite young swimmers from all over the world in learning water polo drills from members of the Terriers’ nationally-ranked water polo squad.

The water polo demonstration was the closing activity of a week-long international swim camp held last week at St. Francis by the Swim Strong Foundation and World of Swimming.

The session, with participation of swimmers ages 10 to 18 from Estonia, Mexico, Russia, Santa Lucia and Ukraine as well as 14 children from New York City—was meant strictly for fun, but after the event the Beep had a clear message about water safety.

“Learning to swim not only serves as a healthy way to keep fit, but it is also a life-saving exercise that every young person needs to think of as a rite of passage, like obtaining a driver’s license or graduating high school,” said Mr. Adams, who has stressed water safety throughout his decades in public service.

“It’s a great thing any time we can expose young athletes to a sport they’ve never seen – both for the kids and the college athletes working with them,” said Mr. Quigley, who is also the founder of the Brooklyn Heights St. Francis Water Polo club, a youth water polo club located in downtown Brooklyn. 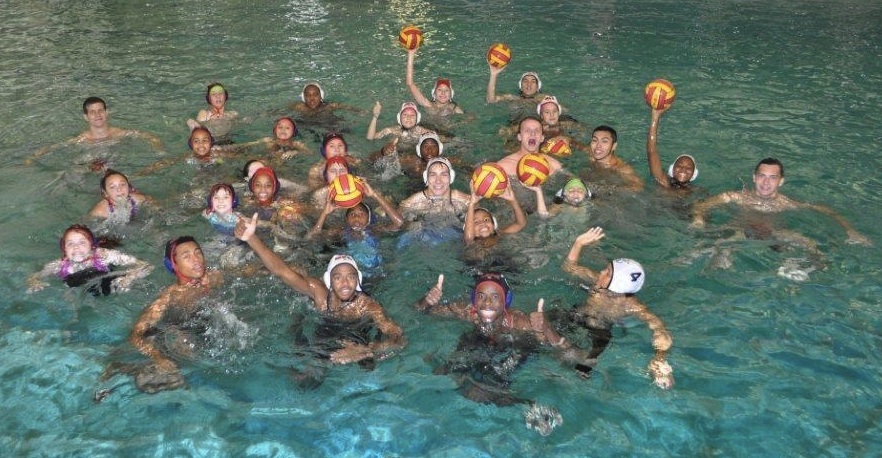 “Our Borough President was on hand because of his long-standing commitment to ensuring that Brooklyn families are safe in the water, of particular concern given that there have already been six drowning deaths in the city this summer,” said Shawn Slevin, director of the Swim Strong Foundation.

Swim Strong, whose mission is to changes lives through swimming and water safety, provided full scholarships so that seven New York City kids could participate in the program focused on developing competitive swimming skills.

According to Ms. Slevin, the swim camp—held in the City for the first time—was ideal for young athletes to “step up their game” by working with top-flight coaches, including Olympic champion Jamie Peterkin, US national champion Merle Liivand, national Russian swimmer and USA coach Elena Nannoshi.

Even though he’s not a word class swimmer, The Beep is no slouch when it comes to water polo, a demanding sport far more popular in other parts of the world.

“I was excited to take a dip in the pool and learn from some of the best swimmers Brooklyn has to offer,” said Mr. Adams.