BHB contributor/reader Peter Kaufman caught a gang of alleged Citibike thieves red handed Friday night as they returned to retrieve their stolen booty from the service entrance of 62 Pierrepont Street. And he has the video to prove it.

Last night some kids stole 4 Citibikes and put them in a basement stairwell. We called Citibike and as we were helping load them kids came back By time i got downstairs, Citibike guy was there.

I was helping him take bikes to the Citi-van when the culprits returned to claim stash.The chase was on.

Here the two I caught up with at corner of Clinton and Montague. Past 2 cop cars. No cops inside. 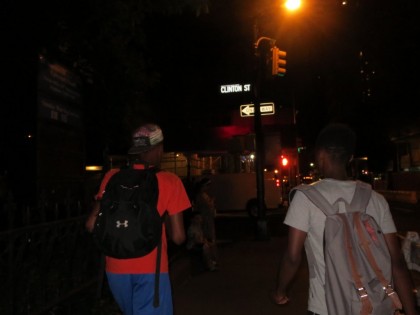 RELATED: Where Was the 84th Precinct While Vandals Devastated North Brooklyn Heights and Beyond

“Why you taking pictures of me?” Why do you think, mother-f*cker? The other guys – like 3 others, 1 on bike, had split down clinton.

After our little tete-a-tete, a cop car did come by, but they had lights on, and were on run. Couldn’t give a shit about this minor issue.

When i got back to 62 pierrepont, the citibike guy had gone around the block looking for me. couldn’t believe how fast i had taken off.

i said, ‘not bad for an old man, (i’m 49). He said, “Old man, like Hell.” I credited good living and citibike charter membership.

kicking myself for not using one of the citibikes to tail them, but again, what could i really do when i ‘got’ them? Citibike guy said..

this wasn’t an infreq. occurrence. people don’t dock bikes properly, and kids test for it. he picks quite a few up in BX. even one in NJ.