Last night vandals wreaked havoc in Brooklyn Heights. The amount of damage to property and cars in the area and shown on Karl’s video demands that the question be asked — where was the NYPD?

With at least two recent incidents of vandalism in the area recently and increased foot traffic due to the popularity of Brooklyn Bridge Park, it’s simply ponderous that additional patrols have not been deployed to the area.

The damage continues all the way to Montague Street as a BHB tipster sends us these photos — again where was the NYPD? 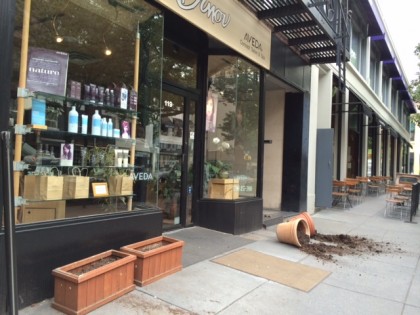 This comes after a group of three or four thugs disrupted business at least two North Heights eateries on Thursday night and another (perhaps and likely the same) began fighting on Willow Street causing neighbors to call police.

Violence against property in Bklyn Heights is out-of-control. Hey @NYPD84Pct @NYPDnews @CommissBratton DO SOMETHING! http://t.co/bpGb3IhoAw

Update: The BHA’s Judy Stanton tells us via email that she spoke to the precinct captain at the 84th today. They claim the following:

1) Nobody called 911 to report the vandalism in Karl’s video.
2) Cops were on duty in Brooklyn Bridge Park and Brooklyn Heights on Friday night. The captain claims no calls were made to 911 about the rowdy group in the North Heights.
3) Five people have called 311 from the area since Thursday night but not about vandalism.
4) There will be more police in response to this post and the BHA’s call this weekend.

We can assume that Ms. Stanton spoke to the 84th before a report the we are aware of regarding one of the incidents in Karl’s video was made. We are waiting to hear if the 84th has responded.

Update: The business owner informs us that he did speak to someone at the 84th who said they would send officers to the location. The call was made around noon on Saturday. No patrol or officer ever arrived.

As for NO ONE calling 911 about one of the rowdy groups on Thursday night in the North Heights, that is not true. How can we be so sure – I MADE THE CALL. There was a response, but we have no further update.