If Someone Could Climb to the Top of the Brooklyn Bridge and Change the Flag, What’s Next

Just a few days after the NYPD failed to stop vandals from trashing a large swath of Brooklyn Heights, another prankster has changed the flag (update TWO flags) atop the presumably heavily guarded Brooklyn Bridge. Update: The flags were removed around 11:15AM.

Am I dreaming?? White flags have replaced the American flags on the Brooklyn Bridge! What the hell! @EverythingNYC pic.twitter.com/W3oW7N3hmE

Obviously: #deblasiosnewyork “@JonLemire: A white flag has appeared atop the Brooklyn Bridge. Did we just surrender? pic.twitter.com/Amt3dBTJWC”

Gothamist: An NYPD spokesperson says, “We’re looking into some possible incident with the flag that’s on the bridge. We don’t know yet, we’re waiting for information from units that responded.” A DOT spokesperson did not immediately respond to a request for comment.

Gothamist also points out that the “white” flag appears to be a faded American flag: 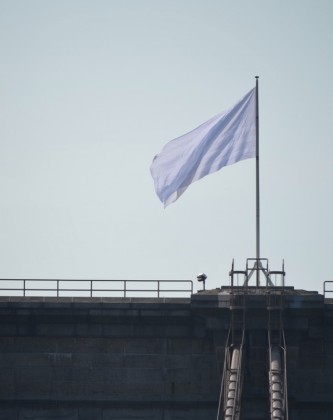 NYPD ESU is there and handling it. Unauthorized replacement, unknown who did it.

Emily Gould is Sorry for Upsetting Lena Dunham or Mailer and Vidal Did It Better
Brooklyn Beep Adams on Brooklyn Bridge White Flags: I’m Not Laughing; Offers Reward for the Capture of the Vandals