Update: Great news for North Heights residents who want to see the fireworks up close and personal via the NYPD:

After a few years away, Macy’s July 4th fireworks return to the East River. For information on viewing in Brooklyn Bridge Park and street closures in Brooklyn Heights click here. 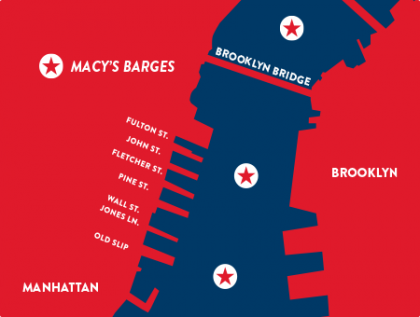 The fireworks may be viewed from any area with an unobstructed view of the sky above the East River. The public viewing sections will be the elevated portions of FDR Drive with the following entry points:

Montgomery & South Streets: From the North, viewing along the FDR between Manhattan Bridge and Montgomery Street. Brooklyn Bridge entry from St. James Place (Pearl Street) & Wagner Place (viewing both north & south of the Brooklyn Bridge). Broad Street and/or Old Slip at Water Street (viewing between Heliport & south side of Brooklyn Bridge Esplanade Viewing: South Street Seaport to Houston Street along the East River ADA viewing area: Murray Bergtraum High School track and field facility, at the base of the Manhattan Bridge. Use the entrance at Market & Cherry Streets. All of Brooklyn Bridge is ADA accessible. The following pedestrian streets will be closed to all non-emergency vehicle traffic, with most closures happening at 4pm & towing all day:
• South Street between Whitehall Street and Jackson Street
• All side streets between South and Water, South and Cherry
• Front Street between Old Slip and John Street
• FDR between Battery Park Underpass (West Street) and Houston Street
NOTE: Piers 15-17 are not public viewing areas.