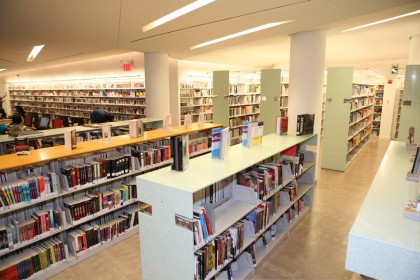 What Exactly IS a “21st-Century” Library?

By brooklynheightsblog on June 7, 2014 9:21 am in Architecture, Brooklyn Heights, News, Real Estate

When Josh Nachowitz, the Brooklyn Public Library’s Vice President for Government and Community Relations, refers to plans for a 21st-century library, listeners might be excused for envisioning a branch manned by drones and robots, or—worse yet—assuming that what he really means is a library devoid of books.

In fact, Nachowitz, the face of the BPL’s controversial plan to sell its aging Brooklyn Heights branch for development as a high-rise residential tower, has a very clear idea of what a contemporary, up-to-date library should look like: the New York Public Library’s Battery Park City branch in lower Manhattan (175 North End Avenue).

“If you’re going to visit one branch, I would encourage you to check out the Battery Park City library,” Nachowitz said in a recent sitdown with BHB. “It’s a one-story library with a mezzanine at the base of a condominium tower…. [I]n terms of programming and having a library in a multi-use residential building, it’s exactly what we want to do here—although it’s smaller.”

On a recent visit to the branch, built in 2010 for $6.7 million dollars, the first thing a reporter noticed was books, and plenty of them. The Battery Park City branch has 24,000 items (books and DVDs) and—thanks to its impressive design—has become the NYPL’s signature statement in a broad plan to modernize its facilities and keep abreast with emerging technologies and changing use patterns.

Along with its holdings, the library provides a range of digital services, from rows of sleek desktop computers (quite busy during a Friday afternoon visit) to ample surfaces for patrons’ laptops to an efficient wireless network that works anywhere in the building.

At 10,000 square feet over two levels, the Battery Park City branch is significantly smaller than the facility proposed as a replacement for Brooklyn Heights; but it appears quite spacious, thanks to an award-winning design by 1100 Architects. With LEED Gold certification from the U.S. Green Building Council, the branch is touted as the “greenest” library in New York City.

A visitor comes away impressed with the tranquil atmosphere created by seating areas nestled among the stacks on the ground floor. Risom lounge chairs from Knoll Studio provide resting places for users, and charming chains of multi-color origami cranes strategically located throughout the main floor contribute to the ambiance. The building’s ceilings—much remarked on by the architectural press—are a pleasing array of shifted triangular plates accented by slits of fluorescent lighting.

A striking circular staircase made of recycled glass and mirrors takes patrons to the reading and periodicals mezzanine, half the size of the ground floor. Devoid of books, it is a retreat for the digiterati and their like: tables were populated by browsers using all manner of portable electronic devices, with the occasional researcher surrounded by sheets of paper—and even a patron taking in a quiet snooze. 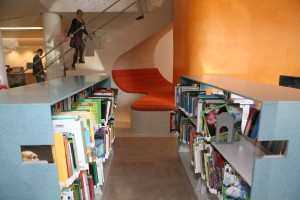 Unlike the Brooklyn Heights branch—with its thousands of square feet dedicated to cataloging books, an unnecessary need in the digital age—there’s very little wasted space at Battery Park City. The staff, of course, has its private areas, but the space is clearly designed to accommodate those who use it, not maintain it.

But in one critical regard, Battery Park is a conspicuous example of what Mr. Nachowitz of BPL has proposed as the solution for the Cadman Plaza branch. The library is comfortably nestled in the prow of River House, a 31-story residential high-rise designed by David Rockwell. As such, it is an ideal “comp,” to put the matter in real estate terms, for what Nachowitz and his boss, BPL President Linda Johnson, envision as a paradigm of what the Brooklyn Heights branch and, indeed, perhaps more of the “new” Brooklyn Public Library system might look like. Once the developer and design are determined, the BPL predicts a two-year completion time for the branch and its host high-rise—clearly a very optimistic timeline of events.

And, it should be remembered, there is a distinctive difference in the contexts. Battery Park City, having been created in the ‘70s on landfill from the World Trade Center’s excavation, is chock-a-block with soaring towers that trumpet their newness. Brooklyn Heights, with its centuries-old town houses and venerable Historic District, is worlds away from the architectural cacophony of its cross-river neighbor.