Forgotten New York is one of our favorite sites. And we were pretty jazzed to see them feature Willowtown this week. However, we couldn’t believe our eyes when we saw the shade being thrown at Willowtown’s most beloved modern structures. Numbers 40, 44 and 48 Willow Place were designed by architects and Heights Heroes Joe and Mary Merz, but to Forgotten New York they’re just “modern monstrosities”. Too each is own, eh? 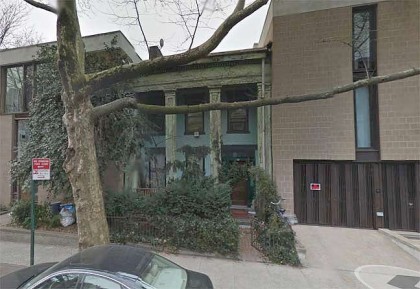 Forgotten NY: It’s the lone survivor of #42, 44, 46 and 48, on the west side of Willow Place. As you can see it hasn’t received nearly the same amount of TLC. Modern monstrosities hem it in on both sides.

In the early 1960s three new cement-block houses were built on empty lots on Willow Place that were city-owned and put up for auction–40, 44 and 48. These first modern houses in the neighborhood were designed by Joe and Mary Merz, both architects who have resided in No. 48 since 1965. No. 40, a double-width house, was designed for the attorney Leonard Garment, who went on to renown in Washington, D.C., as President Nixon’s special counsel.