The New York Daily News reports on the Cranberry Street tree that was taken down last week by the city. While we cited its appearance in the 1970 film “The Landlord” the NYDN took a more populist route by calling it the “Moonstruck tree”. Sure… why not, right? After all it’s the crown jewel of movies shot in our humble historic neighborhood. We are totally devastated by this act of tree terror.. right?

“I was surprised when I saw it cut down,” Brooklyn Heights octogenarian Sam Buck, tells the tabloid. Adding a heaping dose of FEH by saying, “I’m not too emotional about it…But it was a nice tree.”

NYDN: A spokeswoman for the Parks Department said that the agency cut down the oak tree after an “extensive evaluation” that started last fall revealed that the tree was hazardous and diseased by a “wood decay fungus.”

“The evaluation included using a resistograph to measure the amount of sound wood inside the tree,” said agency spokeswoman Meghan Lalor, who added that the Parks Dept. began its evaluation after a call was made to 311 regarding the tree.

BHB reader “Cedric”, who tells us he placed a call to 311, sent along more photos of the diseased tree stump along with this new dispatch:

Here are some pictures of the tree felled on the corner of Cranberry Street and Columbia Heights. It looks like the tree had been badly damaged by the fungus that was visible from the outside so it looks, therefore, as though felling the tree was the right thing to do although one should ask someone competent before drawing a conclusion.

The question is, then, why was it allowed to deteriorate so far? 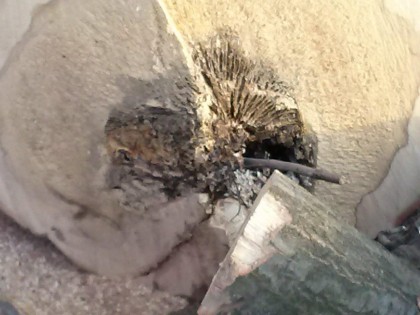 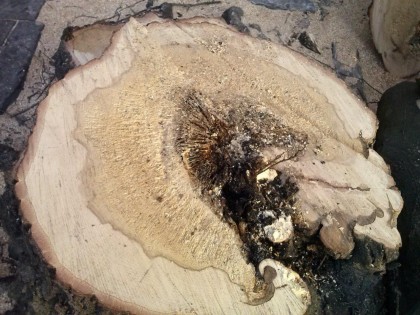