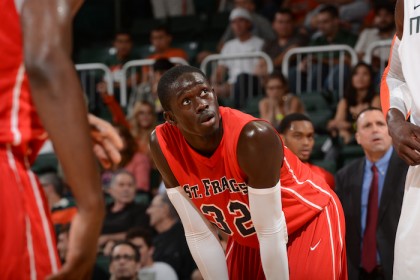 A common sports adage is that good offense starts with great defense. If that’s true, then the St. Francis Brooklyn men’s basketball team

In a dominating performance on Monday at the Pope Center, sophomore forward Amdy Fall blocked five shots and altered the path of countless others as the Terriers, behind a season high 12 blocks, ground out a 77-65 win over an overmatched New Jersey Institute of Technology squad.

Thanks to the efforts of Fall, Jalen Cannon, Sheldon Hagigal, Anthony White, Wayne Martin and others, St. Francis (8-5) is one of the nation’s top defensive teams, holding opponents to an average of 63.5 points per game— good for 30th in scoring defense—on less than 40% field goal shooting.

The Terriers need all the defense they can get, as they average barely 64 points per game.

Monday’s matinee was a perfect illustration of how St. Francis wins ugly. In a sluggish first half the two teams combined for 22 fouls, 16 turnovers and countless missed opportunities, primarily by St. Francis, which went into the locker room at halftime ahead 36-32.

Six minutes into the second half, the Terriers were barely clinging to a 45-43 lead.

Then Fall checked in and quickly turned the game around. Plying his craft under the defensive glass, Fall produced three blocks over the next two minutes as the Terriers reeled off ten straight points to open up a 55-43 lead.

“That’s natural to me. I’ve been doing that since high school,” said the 6-6 Fall about his propensity for blocks. “I’m just trying to change the game, start a fast break with a block.”

The goal is to win, and Fall takes faith in another sports maxim: defense wins championships.

“We’re trying to be a great defensive team, because that’s the only reason we’re going to win.”

“I thought we played well defensively,” said St. Francis coach Glenn Braica. “We played hard, we really did. I was happy with that.”

Ever the realist, Braica added, “We’ve got to get better in offensive execution, rebounding – we’ll have things to work on when we get back from Christmas.”

Waiting for the Terriers on the other side of their Christmas break is a game on Monday against Delaware State (2-9) in Dover, DE, followed by a game on January 4 against Columbia (7-5) in Morningside Heights. The Lions are even stingier on defense than the Terriers, allowing just under 60 points per game, good for 10th nationally.

Looming for St. Francis is their first Northeast Conference game at home on January 9 against defending NEC champs LIU Brooklyn (4-7). Not only have the Blackbirds won that last six games played between the two teams, but they average 74 points a game.

If the Terriers are going to capture their first ever NEC title and NCAA appearance, their defense must lead them. Amdy is certainly a believer.

“When it’s all said and done, I think we’re going to be one of the best defensive teams in the country.”

Photo: Amdy Fall in action during a 66-62 overtime win against the University of Miami/St. Francis Brooklyn Athletic Dept.