Unless you’re a time traveller from 1975, a member of the Warriors or a writer at Complex magazine, you know that graffiti is lame. Case in point – the refrain of the popular song “Blurred Lines” scrawled on this utility box on Cranberry Street. You have been assaulted by the lyric – ‘you know you want it’ – hundreds of times unless you’ve been under a rock for the last few months.

Harmless? Nope. The Robin Thicke hit has been banned from being played in bars at five British universities who have ruled it “excuses rape culture”. 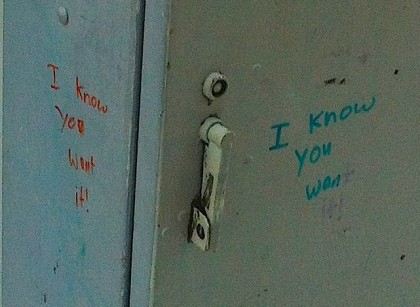 As a matter of fact, we’re including the safe as milk Jimmy Fallon version here because the official video of the song has many naked ladies in it (however if you feel you MUST watch that version for RESEARCH ONLY you can see it here):

So, who’s gonna call Captain Cleanup to fix up this mess?