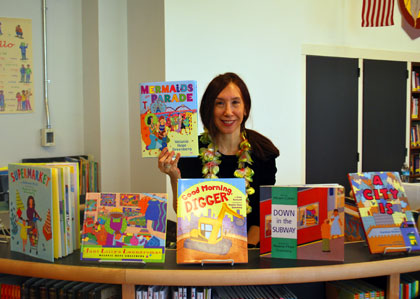 Melanie Hope Greenberg — 32-year Brooklyn Heights resident and a longtime author/illustrator of children’s books — is on tour, and if her fans at PS 58 are any indication, she’s a rock star.

Greenberg — who was named to The BHB 10 last year — gets inspiration for her books from the neighborhood around her, and for her latest book, “Mermaids on Parade,” focuses on the annual Mermaid Parade in Coney Island.

And so there she was, on Tuesday morning in the snow, reading her book to first and second graders at PS 58 in Carroll Gardens, who couldn’t stop squealing with delight whenever they saw pictures of the boardwalk or the Cyclone.

“The kids were so engaged,” said librarian Maureen Vadala. “She’s very animated, and held their interest. The subject matter is something they identify with, and she was able to use that to her advantage to get them to see the larger picture of how a book is made.”

What’s most noticeable about her work is the color — bright blues, pinks, purples and oranges fill the pages of the Mermaid parade and Coney Island scenes, and in her other books as well. 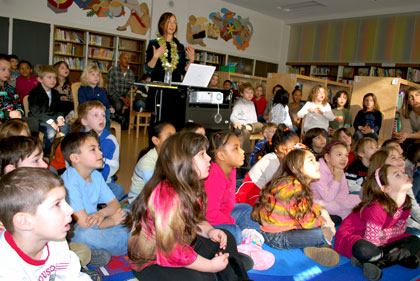 “Mermaids on Parade” is about a young girl — the narrator — who dresses up as a Mermaid Coming Out of Her Shell, marches in the parade-slash-block-party, and then wins the Best Little Mermaid award.

That was 6-year-old Luke’s favorite part, he said.

Greenberg first conceived of the idea three years ago, marched in the parade twice for research (and for fun), and then wrote her mermaid tale.

Rekindling her inner child wasn’t a problem with this project — it’s hard to not to internalize that creative, youthful energy and spirit of the parade, after all.

“The book was always good vibes from the get-go,” Greenberg said.

“I thought kids would really enjoy the feeling of the book and the magic of the parade, because I knew if I loved it and it brought out my child spirit, children would love it.”

The book itself is Greenberg’s latest Brooklyn Heights-inspired hit. She wrote “Supermarket” in 2001, which is based on the Key Food on Montague Street, and “Aunt Lilly’s Laundromat” in 1994, inspired by Montague Laundry.

“I just like bringing the whole community together,” she said. “It’s exciting.”

Greenberg started drawing as a child, and sold paintings and pins on Montague Street in the 1980s. She then fell into designing greeting cards, scored an agent, and discovered children’s books. For more than 20 years, the two worked together to secure book deals, but recently Greenberg decided to strike out on her own. “Mermaids on Parade” is her first foray, and so far, things are positive, she said.

The PTA at PS 58 purchased 200 copies of her book “A City Is,” which she signed and distributed to second graders. The students are learning about communities, and she taught them how to create dioramas of streetscapes with recycled materials in art class, like making water towers from cocktail umbrellas and paper towel rolls, and windows from plastic bag ties.

Greenberg focuses on her blog, mermaidsonparade.blogspot.com, where she posts about the process of creating her books and upcoming events.

In April, the Brooklyn Public Library’s main branch in Grand Army Plaza will host a 20-year retrospective of Greenberg’s work titled “Ordinary into Extraordinary,” which will showcase her picture books and illustrations of Brooklyn.

The title, she said, is emblematic of how she views her work.

“In an ordinary street scene, a kid sees things with eyes of wonder and it becomes extraordinary,” she said. “I have a childlike vision, and that’s how I see my work, and that’s the audience I paint for.”

Top: Melanie Hope Greenberg, a children’s book author and illustrator, poses with some of her books. “Mermaids on Parade” is her latest.

Bottom: Greenberg explains the process of how to write a book, sell it, and market it to the first graders at PS 58 in Carroll Gardens — and captured the kids’ attention wholeheartedly.