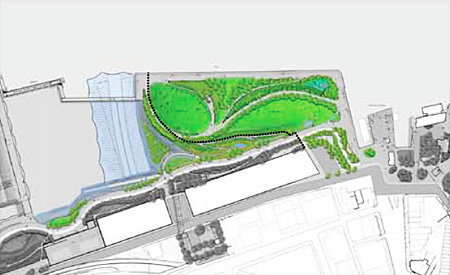 At last night’s Community Board 2 meeting (at which the Board approved the Dock Street proposal–see post below), Regina Myer, President of the Brooklyn Bridge Park Development Corporation, presented a projected schedule for the “parkification” of Pier 1, the northernmost of the piers visible from the Promenade. Myer said that fill and topsoil will be brought to the pier beginning next month, and that by the end of spring much of the pier will be sodded and “green”. The Corporation Plans to open Pier 1 in two phases: the lawns on the northern portion late this year, and the southern portion, including a small boat ramp, in summer of 2010. (Update: The Brooklyn Paper states that a luxury hotel planned for the area inland of Pier 1, which was expected to provide funds for maintenance of the Park, has been “quietly abandoned”.)

Construction company Skanska has begun installing utilities on the site, and by February will be importing 60,000 cubic yards of fill and topsoil (enough to fill Boro Hall twice) by truck. This fill will be used to create the grading, including a 25 foot hill, on Pier 1. In early spring they will install finishes, including placing steps, building a gate house, laying top soil, and beginning playground construction. Pier 1 will turn green at the end of spring with the planting of trees and shrubs, and the laying of sod, turf, and ground cover. Paved pathways, benches, and railings will be installed in the fall.

Pier 1 will include 9.5 acres of green space. New in the plan is a set of grand “river steps” made from granite salvaged from the Roosevelt Island Bridge, which will cascade from the lawns to the waterfront promenade. Also added is a small .15 acre “tot lot” playground with swings, spring rockers, and stainless steel climbing domes for small children.

Questions concerning financing of the Park, which have grown more pertinent with the apparent abandonment of the hotel proposal, will be discussed at a public meeting in Metrotech on Thursday evening, January 29.