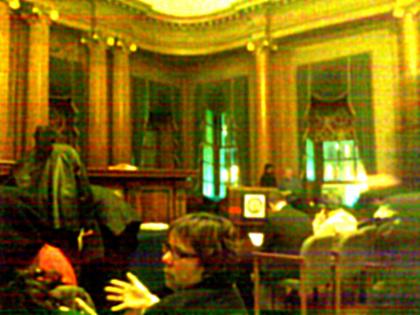 According to sources at tonight’s meeting, Community Board 2 gave their stamp of approval for the Two Trees’ Dock Street DUMBO project. The final vote was 30 yeah, 7 nay. More details to hopefully arrive soon.

And this dispatch from a BHB Tipster in attendance:

Yes, a full house, some standing in the back. Some press.

Marty Markowitz swore in some new CB members and gave a little talk about how important CBs are.

A few other items, then the 5th item on the agenda was the Dock St. project. A few CB members who had previously not had a chance to speak spoke out against it—on person quite cogently, reminding the CB that a few years ago when Walentas previously tried to build tall, that they unanimously passed a resolution saying that nothing taller than the roadway would be approved in the future. That was completely ignored, obviously, and the school carrot carried the day in a big way.

I didn’t see Jed, but it’s possible he was there.

People holding signs for and against.

Clearly it was emotional for some people on the CB and in the audience.

Bottom line, you win some, you lose some. It won’t be the end of the world, but I truly hope that Two Trees lives up to all of its commitments to the middle school. Basically since nothing is in writing, and no financing is lined up, they just handed Two Trees a blank check. A few CB members pointed that out. One CB member called the BoE school building process “rotten.”