By Chuck Taylor on April 24, 2013 11:05 am in Brooklyn Heights, Government, Landmark Preservation, News, Other Brooklyn, Transportation, War On Fun

WINS-AM (1010) reported this morning from Brooklyn Heights that the newly installed Citibank-sponsored bike-share stands in the neighborhood are not only irritating residents—who voiced on-air that they don’t fit in with the historic tenor of the Heights—but have become a target for anti-corporate brouhaha throughout the borough.

Brooklyn.Some folks loved the idea of the city’s bike-share program…until bike racks showed up where they live.LIVE in 1010 WINS.

The New York Post reports that in Fort Greene, flyers were plastered along a Citibike station saying: “Residential landmark blocks are not for advertising or commercial activity.” 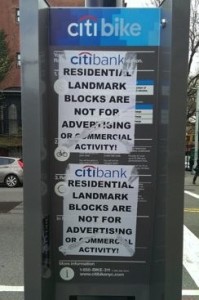 Similar messages have popped up in Clinton Hill.

Brownstoner notes that residents are complaining that they were not consulted about specific bike-share locations—also pointing out that advertising isn’t allowed on landmarked residential blocks.

In the Brooklyn Daily Eagle, residents of 150 Joralemon Street oppose a station installed in front of their building. Kenneth Wasserman tells the newspaper: “It’s inappropriate. This is a very busy block during the day and it’s very quiet at night. To have 25 docks out there without anybody notifying us beforehand really pisses us off.”

A Landmarks Preservation Commission spokeswoman told the NY Post, “We approved the plan for the installation of bike share stations in historic districts throughout the city because they have no effect on the historic fabric of those neighborhoods.”

Councilwoman Letitia James (D-Brooklyn), who supports the program, will host a town hall meeting Wednesday to address growing concerns about the new stations in Brooklyn. It will be held at 6:30 p.m. at the Benjamin Banneker Academy in Fort Greene/Clinton Hill, 71-77 Clinton Avenue.

In Brooklyn Heights, stands are now at the corner of Remsen & Hicks, Clinton & Joralemon and Clark & Henry (outside of the Hotel St. George), with soon-to-be locations at Clark & Montague and Borough Hall.

@bkheightsblog Not sure who said the Citibike racks on Remsen are not blocking brownstones- clearly they are twitter.com/grrlgenius/sta…

Bike share locations appear to have taken over Brooklyn Heights… curious if rest of city is getting… instagram.com/p/Yc5cnnrJgA/

I’d wonder how the people of this #Brooklyn Heights condo feel about the #bikeshare outside their door. twitter.com/DavidMaundrell…