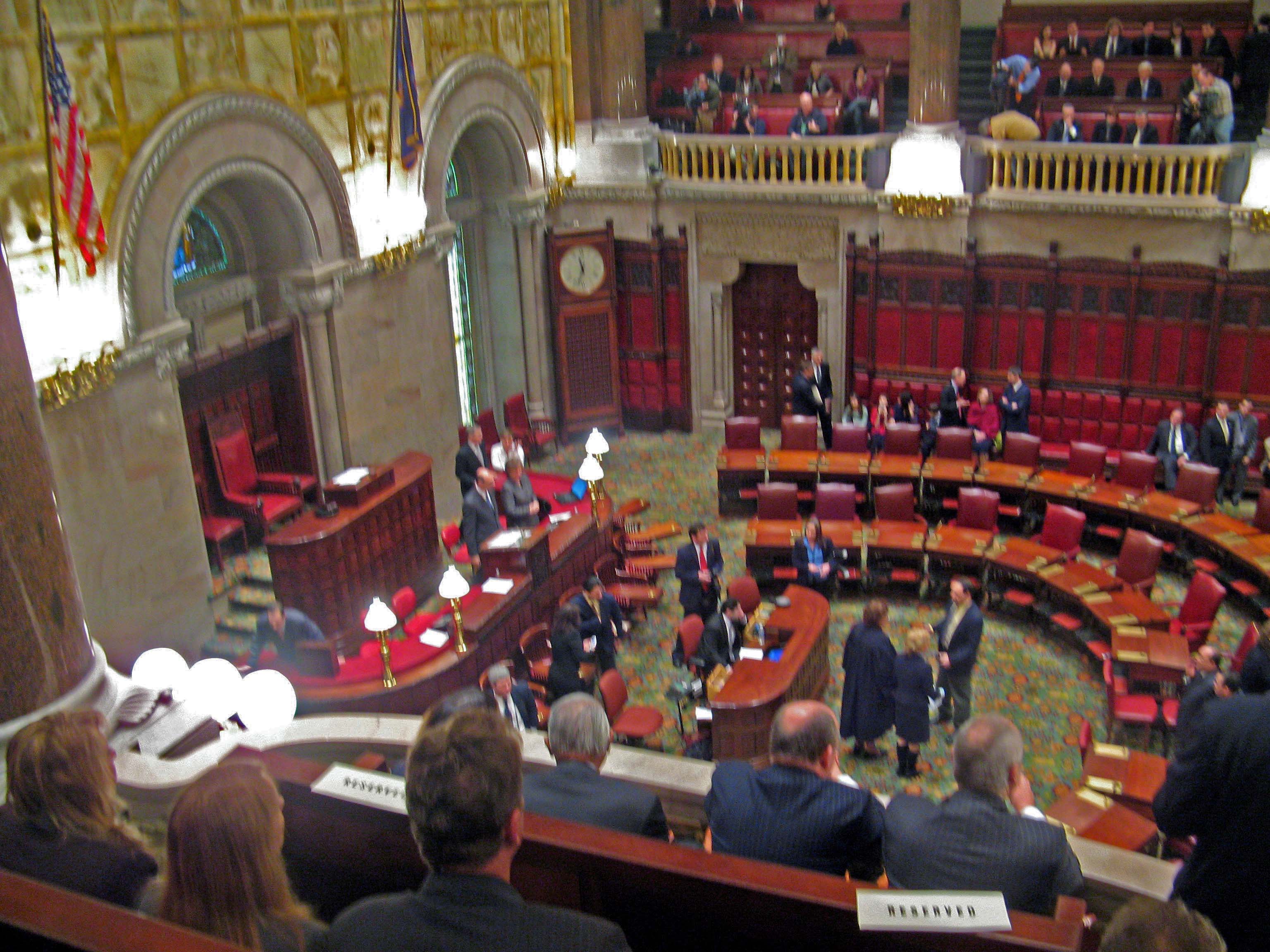 Yesterday, I traveled to Albany with Cobble Hill resident and Brooklyn Bridge Park activist Judi Francis and three members of Daniel Squadron’s staff to witness Squadron’s swearing in as the new State Senator representing the 25th Senate District, which includes Brooklyn Heights and Cobble Hill, as well as DUMBO, parts of Williamsburg and Greenpoint, and lower Manhattan. Following the swearing-in ceremony, we remained in the gallery of the ornate Senate Chamber (see photo above), where we were witnesses to a historic transition. In last November’s election, Democrats gained a 32-30 majority in the New York State Senate, where they had been in the minority since the 1960s.However, following the election, three Democratic senators, including Carl Kruger of Brooklyn’s 14th District and two from the Bronx, threatened to scuttle their party’s victory by voting for the incumbent Republican majority leader, Dean Skelos of Nassau County, instead of the leader chosen by the Democratic caucus, Malcolm Smith of Queens, thereby continuing GOP control of the Senate unless certain demands were met. Among the demands of the so-called “Gang of Three” were leadership positions for themselves and an agreement that no bill allowing marriage of same-sex couples be allowed to reach the Senate floor this year.

An arrangement was finally concluded the night before the Senate’s opening session yesterday, under which the three dissidents agreed to vote for Smith and were given various committee chairmanships, including the powerful Finance Committee chair for Kruger. When asked if the deal included an agreement on same-sex marriage, Smith replied, as reported by NY1, “There was no quid pro quo.”

Nevertheless, as the swearing-in was completed and the Senate was called to order, there was a palpable tension in the air. An earlier deal with the Gang of Three had fallen apart; there was no assurance that this one wouldn’t at the last minute. A resolution making Sen. Smith the Temporary President of the Senate for the 2009 session (normally the Majority Leader holds this office; the “permanent” President is the Lieutenant Governor, an office that is now vacant and will remain so until the next gubernatorial election in 2010) was introduced by Sen. Klein (Democrat, Bronx and Westchester) and seconded, but a substitute resolution naming Sen. Skelos to the same office was introduced and seconded from the Republican side. A voice vote was taken, and the resolution naming Sen. Smith passed. No one demanded a roll call. 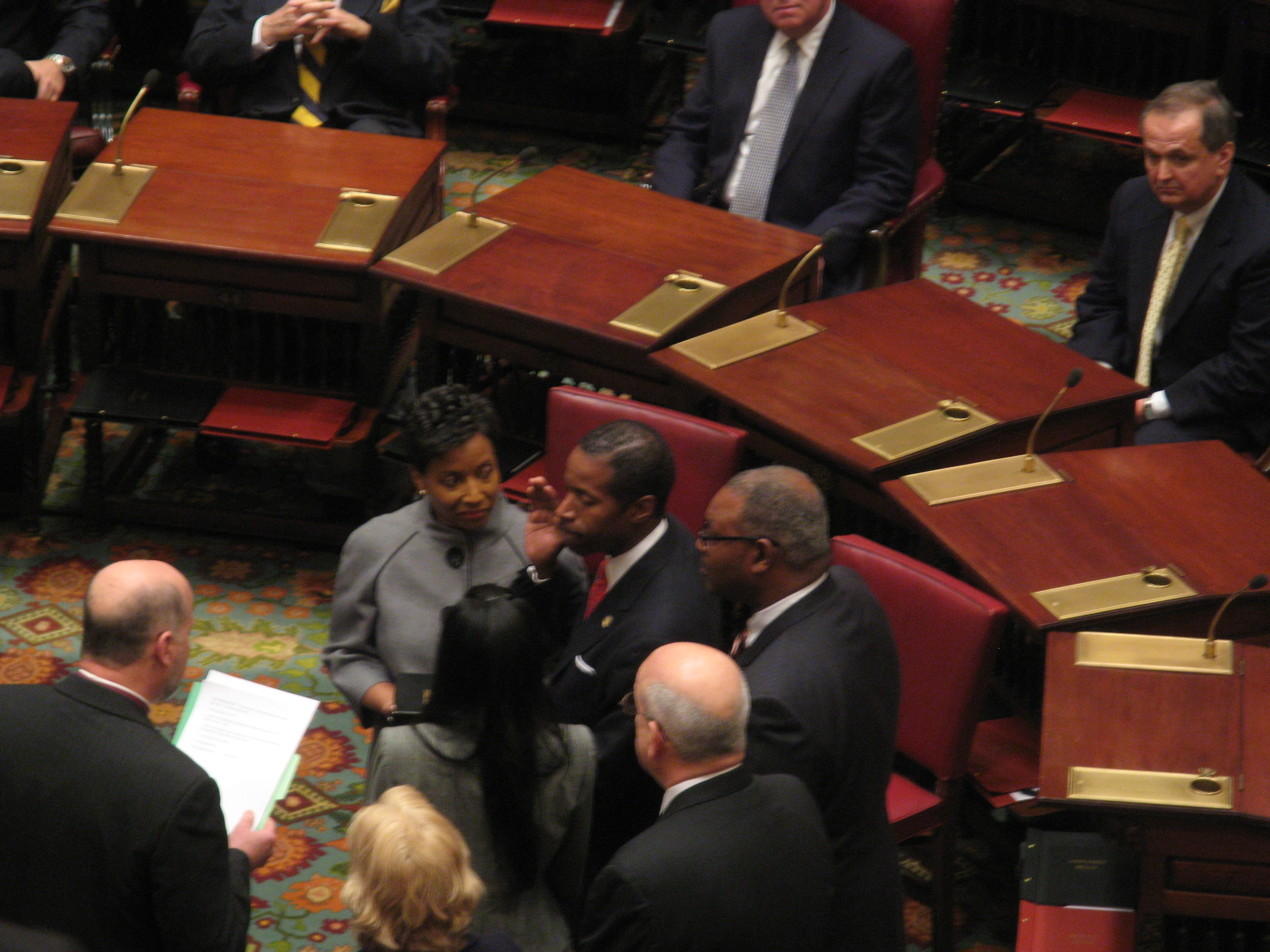 Sen. Smith was then sworn in as the new Temporary President (see photo above) and assumed the office of Senate majority leader, the first Democrat in 43 years, and the first African American ever, to serve in those capacities.

Having gained control of the Senate, the Democrats now have charge of both houses of the Legislature, as well as the governorship. This has not happened since the 1930s. As a practical matter, this should make it easier for legislation to pass, provided that the Democrats are able to overcome fractiousness (their thin margin in the Senate means that it is easy for a few dissidents– witness the “Gang of Three”–to thwart the will of the majority). It means that Sen. Squadron, despite being a freshman, will have considerable influence. He has been named chairman of the Cities Committee, which has as its jurisdiction all legislation affecting cities (including New York City) in the State, including “home rule” matters. This may augur well for attempts to increase the City’s autonomy in policy matters, although any such proposals would also have to meet the approval of Assembly Speaker Sheldon Silver.

What effect it may have on matters directly affecting this neighborhood, such as Brooklyn Bridge Park, remains to be seen. Ms. Francis, who seeks a change of course back to what she describes as the original community-generated plan with ample provision for year-round recreation and no private residential buildings on park land, has been an enthusiastic supporter of Sen. Squadron and is hopeful. In any event, Squadron’s position as a member of a legislative majority is likely to mean that this community’s concerns will receive a more respectful hearing.