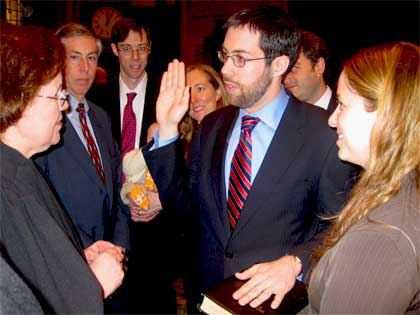 Our new man in the NY State Senate, Democrat Daniel Squadron, was sworn into office today in Albany.  It was announced that Senator Squadron would take over the helm of the Cities Committee a post formerly held by Republican Senator Serphin Maltese.

BHB’s Claude Scales is in Albany and will be filing a report later.  For now, here’s the unexpurgated press release from Squadron:

Albany, NY: State Senator Daniel Squadron took his oath of office on the Senate floor today, ceremonially beginning his term in the New York State Senate. Squadron was sworn in with his new colleagues at the start of the 2009 legislative session; he then voted to usher in the first Democratic majority in the State Senate in 40 years.

“There could be no greater honor than serving the people of Lower Manhattan and Brooklyn,” said Senator Squadron. “In this moment in our state’s history, there is no greater challenge than leading our neighborhoods and our city through tough times.  As a member of the Democratic majority and chair of the Cities Committee, I look forward to working with my colleagues and the community to deliver change that makes a real difference for my constituents.”

*The Democratic majority will be the first since 1965.

*There are six major languages spoken in the district (English, Cantonese, Mandarin, Spanish, Yiddish, and Polish) as well as scores of other language communities.

Though only now officially beginning his term, Squadron has been working full-time for constituents of the district since winning the primary election in September. Among other community initiatives, he has advocated for a comprehensive legislative package to address the MTA budget crisis, called for a rational City/State division of funding responsibilities for Medicaid, education and jails, testified before the City Council about the Lower East Side rezoning and school overcrowding, asked the MTA to offer a rationale and a comprehensive community process before cutting the M8 or other bus lines, protested the planned reopening and expansion of the Brooklyn House of Detention, won a commitment from the owner of Riverside Apartments in Brooklyn Heights that proposed construction would not lead to rent increases for tenants, and petitioned the Department of Transportation to address community concerns about parking changes on Kent Avenue in Brooklyn.

He has also attended countless community meetings in Brooklyn and Manhattan, met with more than 100 constituents about neighborhood issues, and forcefully advocated for Albany reform while developing a comprehensive legislative agenda for the new session.