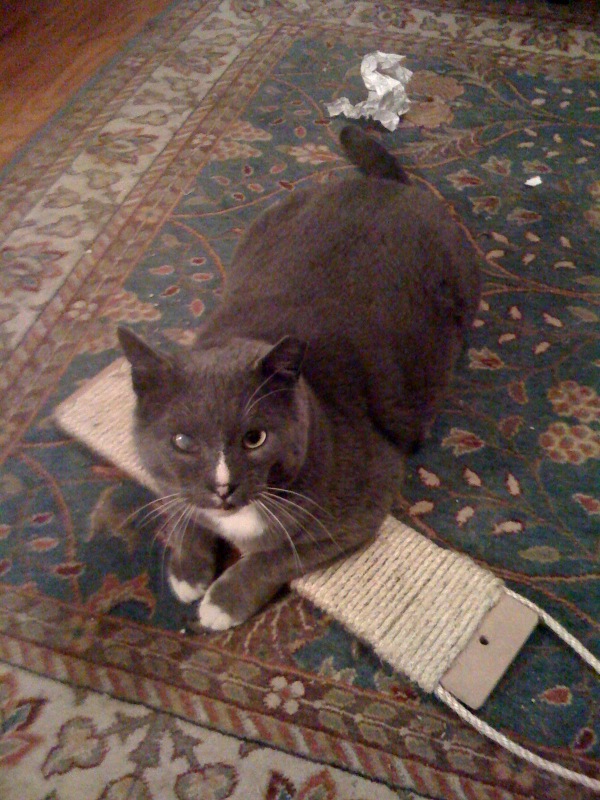 He called Willowtown his home, but he refused to be tied down.  He sauntered along Joralemon, he marched up State, and meandered on Hicks.  Sometimes I’d see him in the vacant lot at the corner of Hicks and State, scouting around for a tasty mouse or bit of pickle.  He was scrawny but he wasn’t a pushover— his musculature clearly visible beneath his bright gray coat.  He was called many things. Hercules for his strength to withstand almost a decade of fair and foul weather.  He was called the Pee Pee Cat for his supernatural powers of spraying.  He was also called Bobby, according to Butch who hangs out on the corner of Willow and State.  Butch said that Bobby lived with a couple on Atlantic Avenue.  They let him roam the streets, do his own thing.  Then they died, and Bobby was left to fend for himself.  Which he did for many years.

Yeah, he was a tough old cat.  I’d see him with a torn up eye or a limp in the pouring rain.  But he would look at me as if to say, “Don’t feel sorry for me baby, I’m free!”  He wasn’t, pardon the expression, a pussy.  But not everybody loved our Bobby.  One day last summer, coming home from the gym on State Street, I saw a young man carrying a trap.  Being naturally curious (nosy), I peeked in and saw the prisoner.  It was Bobby!  I yelped, “Wait, where are you taking him?”  The man replied, “To the pound.”  I said, “You can’t do that.  He’ll die.”  He said, “You want him?”  I explained that no I didn’t want him but he belonged to the neighborhood.  Many people looked after him, loved him, respected him.  He was long time resident!  But the man wouldn’t budge.  He said Bobby was terrorizing their cat, spraying and yowling, driving them crazy.

I said, “Look, how about this.  Drive him to Red Hook.  Drop him off.  At least he’ll have a fighting chance.”  He agreed and drove off.  I knew Bobby would be back.  That he would, in the words of my neighbor, Joe, hop on a bus and come home.  And he did.   I don’t know if he took public transportation, but I wouldn’t be surprised.   In the  meantime, I alerted his many friends.  Deirdre Mullane, literary agent, one of his biggest admirers, rallied to the cause.  She trapped him again.  Took him to Dr. Maddox, got him fixed, vaccinated, trimmed and cleaned.  Bobby was a new man.  But he didn’t take to confinement, how could  he— he was the John Wayne of stray cats, our very own four-legged Rambo.

He escaped.  Neighbors complained again.  More vociferously.  Things looked bleak!  Luckily Deirdre found a family upstate who would take him as an outside cat.  No more city life, but at least he would survive.   Well, not only did he survive, he flourished.  Never left the front porch!  But he hit another snag— the family travels south for the winter.  They expected Bobby to be  self-sufficient, not turn into P. Diddy!  Now what?   Once again, Deirdre sprang into action and brought him home. But he returned triumphant.  He’s put on like twenty pounds.  He’s the size of a small horse.  He’s fat, he’s sassy, he dines on catnip and sleeps on an embroidered chair, his head on a silk pillow.  He’s not the feral feline king of Willowtown anymore, but I dare say he’s happy.

Brooklyn Heights resident LA Slugocki is a new contributor to BHB. Read her blog at  http://www.laslugocki.blogspot.com.