For the sake of context, a Class B misdemeanor—like selling pot or public lewdness—carries a maximum fine of $500, and a Class A misdemeanor—like ducking out on child support or rioting—maxes at $1,000. The steepest parking fine in New York City is $115.

Of course, this issue has been bandied about time and again on BHB, with some commenters insisting that failure to obey pooper scooper ordinances should be punishable by death—for pooch and owner. Neighborhood tidiness is something everyone can agree on but is $1,000 so extreme that it will not be taken seriously by those who would neglect their civic duty?

As the owner of two dogs, your correspondent obeys the ordinance without fail—out of respect for all of us walking around the nabe.

But maybe there’s a better use of the city’s resources in the War Against Poop.

Back in July, Citizen’s Committee for New York City CEO Peter Kostmayer proposed that the estimated 145,000 tons of dog waste generated in the five boroughs each year from the city’s 1.4 million dogs could be used to light homes and to create fertilizer for city parks. Now we’re talking! 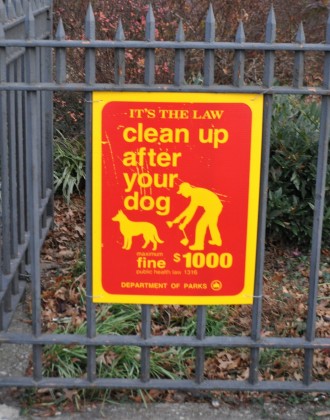 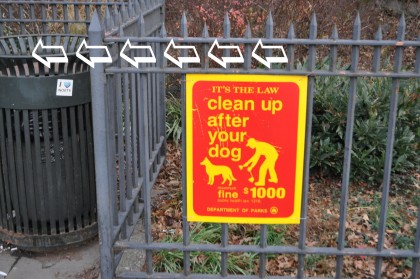