By Claude Scales on December 7, 2008 4:08 pm in Government, Transportation 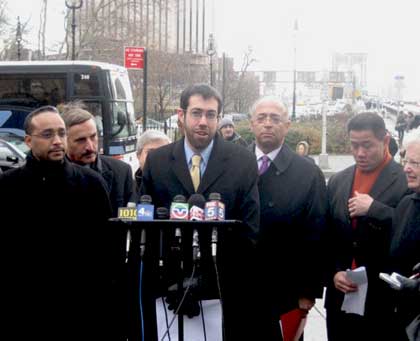 State Senator-elect Daniel Squadron has issued his response to the report issued to Governor Paterson by the Ravitch Commission, which was established by the Governor and “charged … with recommending strategies to fund MTA essential capital projects and operating needs.” Squadron has agreed with many of the Commission’s recommendations, but found some inadequate and took strong issue with the Commission’s proposal to charge tolls on East River bridges. He has invited public comments to be directed to him via his website.

Here is the text of Squadron’s response to the Ravitch Commission report:

Today, in response to the Ravitch Commission’s recommendations to Governor David Paterson, State Senator-Elect Daniel Squadron pinpointed portions that are “On Track” — the best ideas in each of the six study areas — and portions where New Yorkers should “Mind The Gap” – because important ideas need to be considered or modified. He also asked for New Yorkers to visit his website, www.danielsquadron.org, to add their own.

“The Ravitch commission has brought some much-needed independence and creativity to the urgent task of saving our transit system,” said Senator-elect Daniel Squadron. “I’m sure that New Yorkers of all stripes see some ideas that are on track and some serious gaps. This is a place to start, but by no means the end of the story — I look forward to hearing New Yorkers’ reactions as we work together to keep our trains and buses running and affordable for riders.”

State Senator-Elect Squadron identified areas that are “On Track” and places to “Mind The Gap” for each of the report’s six study areas:

1) Review of the MTA’s operating budget and capital needs

· The report points to the need for improved bus service, a necessity for retaining ridership, serving seniors and helping New Yorkers in underserved areas obtain access to transportation.

· The report lacks a comprehensive review of the MTA’s real estate holdings and areas for short or long-term cost-savings.

· The report lacks a clear prioritization of projects within the capital program, including short- and long-term cost benefit analysis, in case the dedicated funding streams come up short.

· The commission recommends against the proposed 23% fare increase, which would be a hardship on straphangers.

· The report is reluctant to adopt a set, arbitrary “fare ratio” formula.

· If the MTA does adopt an inflation-pegged biannual fare increase structure as recommended, it must create a new, more stringent process for out-of-cycle increases.

· The process for determining fares biannually must allow for fare decreases as well.

· Creation of the Mobility Tax for those who benefit from the MTA’s service but don’t contribute, to be put into the new Capital Finance Authority.

· The proposal for East River tolls, which would divide Manhattan from the rest of the city, ignores preferable alternatives for a vehicle-based revenue stream, such as congestion pricing, variable vehicle weight charges, MPG rating charges or market-rate street parking.

· The report recognizes the dire need for an investment in Bus Rapid Transit.

· The report lacks discussion of other alternative transit options, including “people movers,” monorails and the role of bicycling on our overall transit picture.

· The recommendation to rationalize the roles of the Chairman and Executive Director would improve accountability and independence at the MTA.

· The report correctly identifies issue expertise among board members as a valuable asset for the MTA and offers a valuable recommendation that such expertise be required.

· The report does not consider the appropriate balance of board appointments among the Mayor, the Governor, riders and other constituencies.

· The report offers no recommendations about rider experience beyond operational concerns.

· The report recommends increased web access for MTA reports and audits, which would help make the authority more transparent to New Yorkers.

· There is no mention of an independent process for assessing the performance of the Chairman, Executive Director and board based on accuracy of financial projections and rider satisfaction.