One of the most shared photos of Superstorm Sandy’s wrath in Brooklyn last week was of Jane’s Carousel in DUMBO surrounded by flood waters. We learned on Tuesday that its lovingly restored horses, benches and woodwork made it through the storm with little or no damage. However, Jane Walentas noted, “the basement that houses all the electronics was totally flooded.” She added, “We’re optimistic that the Carousel will be fine, but it will probably take some time to get it fully restored to happily prancing again.”

BHB received word from area resident Megan Reilly Cayten that she and a “group of parents and kids who love the carousel” will be holding a bake sale this Sunday (11/11) from 11am – 1pm to help raise funds for the carousel’s restoration. 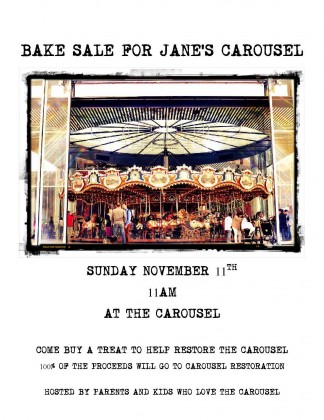 Cayten tells us that Ms. Walentas was “touched” by the idea for the event and will be opening the carousel’s building to the group so they can stay warm while holding the fundraiser.

The carousel is reportedly in working condition but its organ and the electronics which power it need to be replaced. The immediate goal of the bake sale is to raise $175 dollars, Cayten says, to cover the cost of a CD player they’ll need to replace the organ until it is back in working condition.

Jane’s Carousel opened in its current location in September 2011 amidst controversy regarding its placement in Brooklyn Bridge Park. It is currently maintained by the non-profit group Friends of Jane’s Carousel.