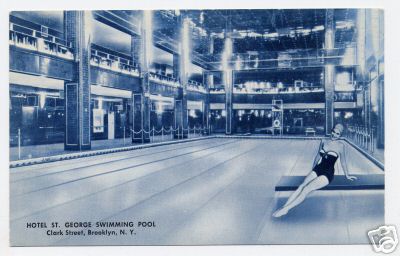 The Brooklyn Eagle has a wonderful story this week about the glory days of the St. George Hotel, most notably its salt water pool.  The piece was written by Dr. Howard B. Moshman, a long time resident and neighborhood dentist.

Brooklyn Daily Eagle: How It Was…: The huge hotel pool varied in depth from 3 feet to 10 feet, with a waterfall at the shallow end, three diving boards at the deep end, a 10-foot-high board in the center, and low boards on either side of it. The St. George pool was the place to go in the winter, when Coney Island and its adjacent beaches appealed only to members of the Polar Bear Club.

My trips to the indoor pool were generally with my childhood pal Malvin Guralnick. I would walk north on Henry Street where I lived at number 309, to Pineapple Street, then east over to Fulton Street. Malvin lived in one of early nineteenth century storefront buildings on the west side of the street, above his parents’ stationery/candy shop. In the 1960s that whole area was razed and supplanted by the Cadman Plaza housing development, and the street renamed Cadman Plaza West.