What’s Next for Workers at Montague Key Food? 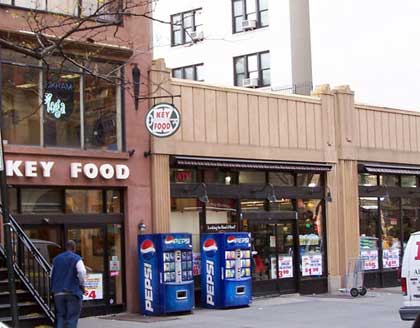 Less than a week after Mamadou “Mohammed” Doucoure was demoted from his position as Assistant Manager to “overnight stock boy” at the Key Food on Montague Street,  he claims store owner Enrico Palazio threatened him with a disciplinary measure for punching in a few minutes early.

“I was standing by the time-clock, and a customer who I knew was looking for olives. I had just punched in, but she needed a hand, so I walked with her to Aisle 5 to help. I returned to begin my shift about one minute later,” he said. That was when he says Palazio handed him a grievance complaint for “incorrect punch-in,” with an added threat: “Next time, there will be disciplinary action.”  Doucoure believes the owners are trying to make “an example” of him for his continued efforts to fight against worker repression at Key Food and in retaliation for turning to the union for support.

Meanwhile, the United Food and Commercial Workers (UFCW), Local 1500, which represents Key Food employees and 19,000 workers across New York City, have filed a complaint with the American Arbitration Association on Doucoure’s behalf.  Director of Special Projects for Local 1500, Patrick Purcell, said the union’s role in this matter is now “being completed by the process of arbitration, in which a neutral arbitrator will decide what the reason is for his schedule change.”

Doucoure, however, is disappointed at what he said is UFCW Local 1500’s failure to represent him throughout the last 15 years. The union, on the other hand, said it has fairly represented him and that “no agency has substantiated his claim that this union did not represent him.”  Purcell said that the union will do everything in its power to resolve issues that workers may have.

“The union is here to represent the workers at Key Food. We will do anything in our power to make sure this happens,” said Purcell.  But other employees expressed they had felt neglected by the union in the past as well.

Assistant Manager Mahamadou Keita, who has worked at the Montague Street Key Food since 2001, said when Palazio falsely reprimanded him for tardiness on multiple occasions, he called the store’s union representative, Paul Santarpia, to file a grievance against the owners.  He was displeased with the lack of attention that Santarpia and the union gave to the situation.

“Paul (Santarpia) doesn’t even know who I am. He never bothered to come to the store and find out what is going on,” Keita said.

Former cashier Anna Bailey worked for the company for 12 years, and quit her job in September 2008, she says,  out of frustration with Palazio’s constant letters and warnings for tardiness.  She said it took persistence for the union to respond to her grievances, but eventually they did.

“Even though I had to pressure them, I could call and they took care of my problems,” she said, adding “they tried their best.”

In May 2006, Doucoure met with the union to file a grievance against Key Food for “hours worked on Sunday, overtime, and pension and welfare due to him,” and to correct his date of hire. He did not hear back from the union for three months, and on August 20 he filed a charge with the NLRB.

Shortly after this, Doucoure met with a union representative on September 7 to process his grievance and settle it accordingly.  By September 18, Doucoure said he voluntarily withdrew the NLRB charge in good faith, and decided to resolve his issues as a civil matter. Purcell said this charge was “dismissed” by the NLRB, which “means Local 1500 has been found by the NLRB to have properly represented Mr. Doucoure.” However, Doucoure said he made “only one complaint with the NLRB and that complaint was voluntarily withdrawn.”

“The NLRB never dismissed my complaint and furthermore did not make any determination as to whether the union properly represented me,” Doucoure said.

At the meeting on September 21, the union proposed a settlement which would grant Doucoure pension credits from 1995, and a $19.00 per hour wage for his full time position as Assistant Manager. This means that Doucoure would make $760 per week. The starting wage of an Assistant Manager in the union contract signed just three days later is $800 per week. Doucoure, who had worked for the company for nearly 15 years, would have made less than a new manager under the terms that the union attempted to bargain with, and so he did not agree with these terms.

On September 24, 2006, Key Food employees were given a four-year union contract, and asked to sign a paper stating that they had received their copy.

“Employees were given a paper to sign, acknowledging that they received a copy of the union contract,” Keita said, “but nobody ever voted on it. The contract was between Local 1500 and Key Food.”

“I did not vote for a contract, and I had no decision in the matter,” former cashier Anna Bailey said.

Keita said employees were “tricked” into signing the contract.  According to the union, every person at the store had the opportunity to participate in the negotiation process.

“This is a 100% open process. We have members sitting at the bargaining table with the employer,” Purcell said.  Although members from Montague Street Key Food did not participate in this specific case, they had the opportunity.  Additionally, the union negotiated with the Matlyn Food (Key Food) company as a whole, not with individual stores, so the bargaining process could not include each person. Therefore, one of the union members was given highlights from the contract to discuss with other employees, who were then asked to sign a paper that either favors or opposes the contract.

“The Key Food employees voted unanimously in favor,” Purcell said, adding that there were “no complaints” about the process, but if people did have a complaint they could have filed it with the UFCW, with the NLRB or with the Department of Labor.”

Consequentially, Purcell said, this contract has resulted in “outstanding” benefits, including “completely paid for health insurance, pensions completely funded by the employer, dental, vision and legal insurance and of course good wages.”

“I finally had benefits, which were beautiful. And they gave me a raise every six months,” said former cashier Anna Bailey.

Included in the contract is an agreement by Key Food to contribute $204.60 per month to the Retail Clerks Local 1500 Pension Fund for full time employees, and to contribute $68.19 per month for part time employees. However, a contract is only effective if it is followed by all of the parties involved.
Doucoure said the contract “has resulted in far from outstanding benefits,” and ultimately neither he nor Bailey has received notice of their pension. Doucoure claims this is because Key Food falsely submitted information to the union that shortened his and others’ length of employment. Either way, Purcell guarantees that Doucoure has pension credits from 1995, and said he would personally deliver a confirmation of this to Doucoure.

By the middle of October 2006, Key Food attorneys from the Fulbright & Jaworski law firm drafted a settlement to resolve Doucuore’s wage and pension grievances. Included in this settlement were an agreement by Key Food to contribute $3,188.90 to the Pension Fund, along with a provision that Doucoure discharge the company from any previous claims, that he refrain from publicly speaking negatively about Key Food, and he agree that the union fairly represented him.

Doucoure refused to sign the settlement because it was an attempt to get him “to go away as quickly as possible” and “make sure I wouldn’t open my mouth again,” he said.

In January 2007, Doucoure twice requested that Local 1500 take his case to arbitration, and he said the union did not respond to his requests. Due to his unfulfilled requests, Doucoure then filed a complaint with the NLRB against the union and Key Food on July 9, 2007. This case is currently in arbitration.

Although employees continue to fear retaliation for speaking up, the UFCW Local 1500 gave its word that “nobody will be terminated from this job in retaliation for coming to the union.” The union’s job is to fairly represent its members, and Purcell gave his word that the union “will meet with members of the community, the city council, and employees at Key Food to resolve any issues the workers may have.”

Assuming this is the case, now the brunt of responsibility for the welfare of Key Food employees falls on the hands of Montague Street Key Food owners Ivan Arguello and Enrico Palazio. They remain silent on the issue.

Doucoure is hoping to invoke change in the way business is done at Key Food on Montague Street and in the millions of stores just like it. He does not expect to see drastic improvements for himself, but he hopes that his co-workers and future Key Food employees can reap benefits.

“You fight, and you may not be the beneficiary, but someone else will be,” he said.