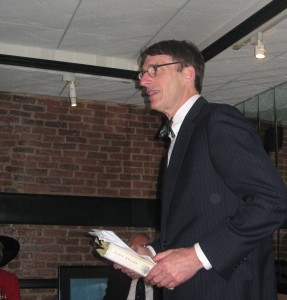 Heights resident and financial pundit James Grant, publisher of Grant’s Interest Rate Observer, spoke yesterday evening at Barnes & Noble on Court Street in connection with the recent publication of his fifth book, Mr. Market Miscalculates: The Bubble Years and Beyond.

The book is an anthology of Mr. Grant’s columns in the Interest Rate Observer ranging from 1999 until May of this year. In these columns are many prescient observations about developments and events leading to the present worldwide financial crisis.

The “Mr. Market” of the title is a character invented by Benjamin Graham, considered one of the past century’s principal experts on interest rates and securities valuation. In contrast to the calmly rational homo economicus, whose level-headed pursuit of self-interest underlies the models of classical academic economics, Mr. Market is fickle and hyperkinetic, buying greedily when the sun shines and selling frantically when the sky darkens. According to Mr. Grant, the failure of the models on which primary lenders, investment bankers and others relied to account for the human irrationality that drives markets was one of the principal causes of the financial crisis. He opined that the same errors may also hamper the rescue efforts now being made by the Federal Reserve and Treasury, noting that Fed Chairman Bernanke is an academic economist intellectually beholden to classical theory.

Another factor leading to the crisis, Mr. Grant said, was the assumption that we had entered a period of unending prosperity. This led firms like Lehman Brothers and Morgan Stanley to operate at levels of capitalization dangerously low compared to the amount of debt they took on. Mr. Grant compared this to a rowboat being loaded down to where its gunwales are barely an inch above water, then taken out onto a lake where even a slight gust of wind could capsize it.

Asked whether the present crisis and the efforts being made to resolve it would lead to a period of deflation or inflation, Mr. Grant said he thought the latter more likely. He called the present decline in real estate and securities prices a needed asset value adjustment. He concluded by noting that most investors now are fleeing to the perceived safety of Treasury bills that have practically zero yield, while the reduction in stock and other asset prices may be presenting some very attractive investment opportunities. As for the future of the economy generally, he said the government’s effect on it was rather like Major League Baseball’s effect on the game: try as they might to kill it, they haven’t yet succeeded.