The first time I met Allen, he bit me in the face.

In military parlance, a “dog fight” is two or more planes in harrowing chase through the skies. I think the term came not from the dogfights that are to the death, but from play fighting. Knowing the distinction can make visiting the Hill or meeting new dogs pleasanter as well as safer.

When I sit among or supervise my Labs in full Battle of Britain mode, there are predictable scripts they follow in what looks, to the unfamiliar, to be a lethal situation. 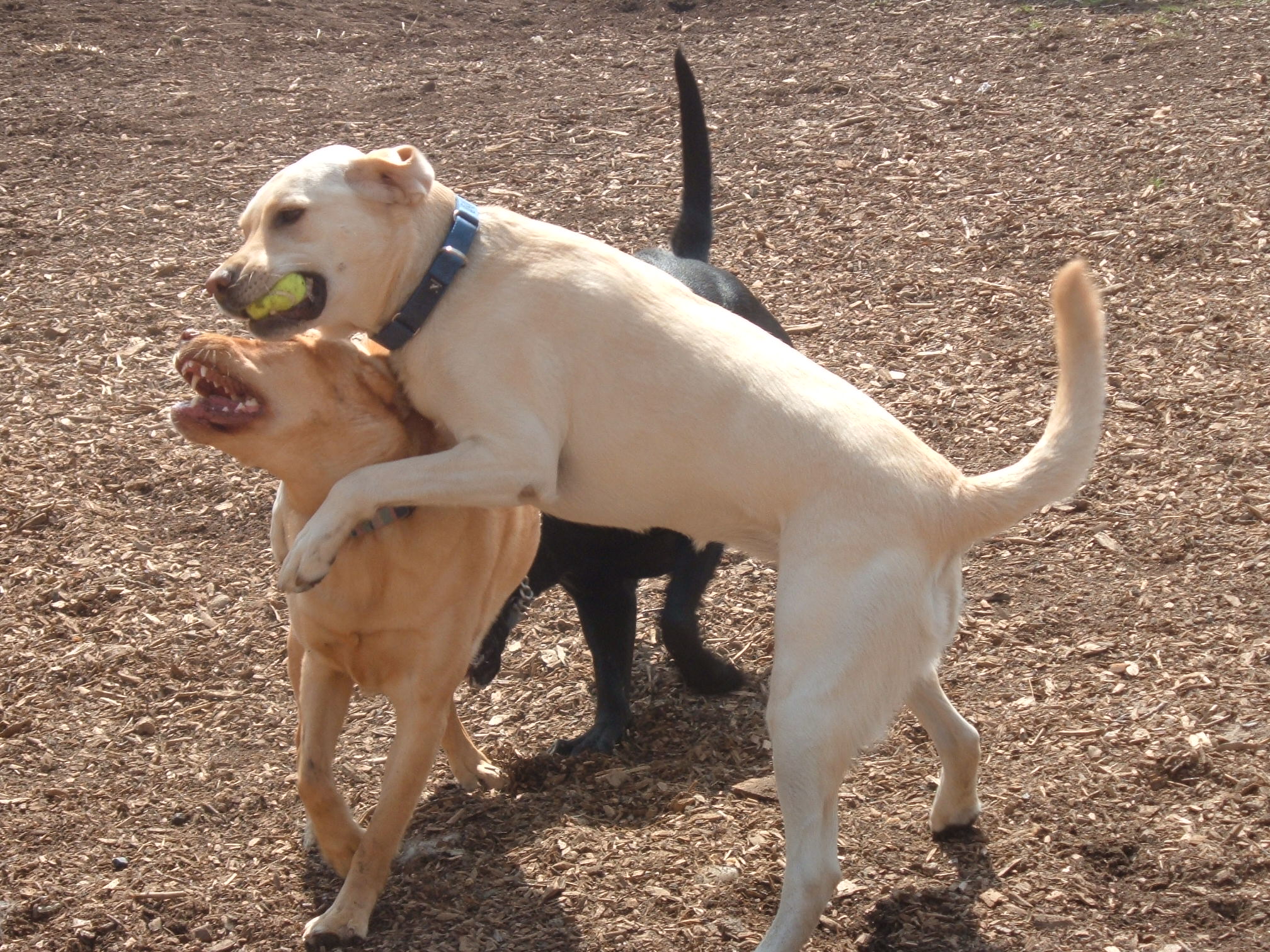 It can begin with tug-of-war, which escalates into snout-to-snout determination to snatch the contested object. Soon enough, the object is dropped and the dogs begin snarling and barking, teeth bared, as they nip at each other’s limbs and, most especially, each other’s necks. When Bangor or Pickering get very wound up, they will break away from the fight and run in great circles, dashing in to nip at his play-fellow and ricocheting back to his hunched all-out run. It’s a magical moment, this rocket’s octane overflowing so lavishly that it can only be expressed in what is known as the “crazy Lab run”.

When Daisy was very young, a woman in the State Street dog run shuddered and reprimanded me when my pup shook a tug-toy and I encouraged her by saying, “Kill the bunny!” To shake a toy is to snap the neck of prey, and all dog play is a spin-off from the prey drive. It’s natural that my dogs’ intramural play is focused on someone else’s neck.

I’ve had some upsetting moments when people don’t understand how dogs play with each other. Pickering is very necky, but I’ve put my hand in his mouth while he’s got a chunk of Daisy and all I get for it is slobber and fur. Hermia will run after a dog but she always carries a ball and rather than biting, she kind of whams her jaw against its neck. What looks fierce can be deceiving if you don’t let the scenario play itself out a bit.

Given enough leeway, Pickering or Bangor will throw themselves on their backs so that their partner can grab their necks as well. Daisy, who is no wienie, actually prefers to loll around on her back and be chewed, although she will bare her teeth and joust from her supine position. “Jousting” is the term for the dance of the teeth, a form of playing chicken in which they go mouth-to-mouth snapping at each other’s faces. Daisy and Bangor have been jousting so long that the act is as finely tuned as an 80-year-old Cajun couple doing the two-step. 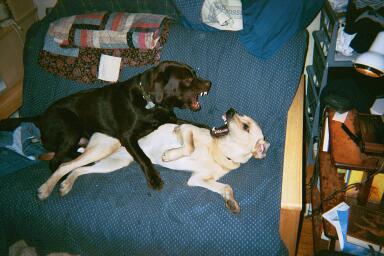 I warn other dog-owners that, on-leash, Daisy will stalk, pounce and then grab her own leash to play tug-of-war with a new acquaintance. It’s the best I can do when I see her head go level with her back and I can’t haul her out of the way. If it’s any consolation, Daisy is playing at her upland bird hunting breeding. The operative word there is “play,” because her last motion is to offer her leash as a toy for the other dog. My warnings don’t always reassure and once again I leave the scene of an un-crime wishing I could articulate better what is happening and what its outcome will be.

Don’t get me wrong. It’s not always innocent. I’ve been on the verge or in the middle of fights that were meant to go to the last breath. There’s no time to talk in those moments, and the dogs’ entanglement is such that there’s no collar grabbing on the human’s parts, no coming up for air on the dogs’ parts.

The test of whether it’s violence or mutual play is in whether I can grab my dog’s collar and pull him off; whether his “victim” is crying or whether it comes back for more; whether, when a margin of time is allowed, my dogs rolls over in fair play. Puppies want to play with Pickering but sometimes owners find the roughhousing overwhelming. I usually walk on when that happens, but again I wish I could articulate how that puppy come to dead halt upon seeing Pickering, how it went down in an iron determination to meet, and rolled over as soon as they did. Puppies need to mix it up with older dogs, even if it looks like the baby’s going to be smashed. It’s how they learn to be a dog among dogs rather than a furry humanette.