As tipped in last Wednesday’s BHB Open Thread, Willowtown’s favorite intimate eatery Iris Cafe on 20 Columbia Place is expanding with a secondary location a couple doors down that will offer to-go orders and a larger grocery selection.

“Flashlight Worthy” reported that the new Iris space (once occupied by Envy Looks hair salon) at 16 Columbia Place in the Riverside Apartment complex, will allow the original location to expand its prep space, soon making it possible to add a dinner menu to the current lunch and brunch specialties.

The cafe, which opened in November 2009, consistently garners praise from the likes of Yelp (“a hidden gem”), New York magazine (“all things to all people”), NYCGo (“lovable”) and The New York Times (“food this comforting stands on its own”).

(The mob scene around noon, Sunday April 29 outside Iris Cafe; and the new space at 16 Columbia Place/Photos by Chuck Taylor) 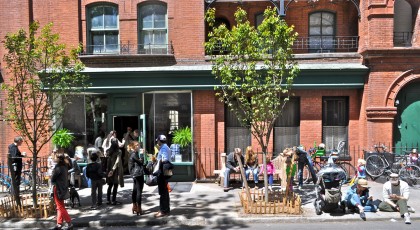 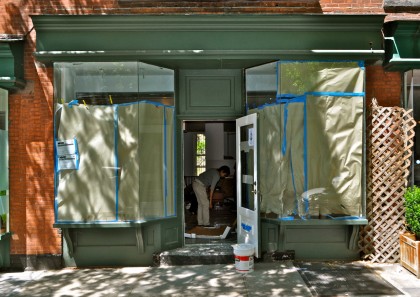