The two adjoining wood clapboard multi-level town-homes at 146 and 148 Hicks Street—whose exteriors were seriously damaged when the Mansion House tree fell during last August’s Hurricane Irene—have both been undergoing intensive renovations since, with all new planking installed and replacement windows, many of which were broken by the felled American elm.

This weekend, the scaffolding came down, revealing the refreshed facades of the iconic Hicks homes. The blue three-level 146, built in 1826, was utilized for filming of the Coen brother’s “Burn After Reading,” starring George Clooney and Brad Pitt, as well as the site of an AT&T commercial.

The gray four-level at 148 was also built in 1826, but its occupants appear intent on maintaining it as a home, instead of, uh, a profit-making machine. 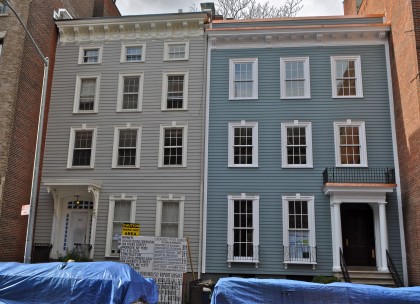