The yellow house at 70 Willow Street where Truman Capote once lived has been sold after being on the market since May of 2010.

New York Daily News: After almost two years on the market, the yellow mansion where Capote wrote “Breakfast at Tiffany’s” has reportedly fetched the highest price for a single-family home in borough history.

The previous record for a Brooklyn single-family house was $11 million for a house also in the Heights. The median house price in the borough is $454,383.

According to the Daily News article, the house disappeared from Sotheby’s broker Karen Heyman’s listings on her web page Friday. She hasn’t responded to inquiries, but unnamed sources told the News that a buyer, acting under a corporate name, bought it for “about $12 million.” The story also quotes neighbors as seeing unusual activity in and around the house recently. 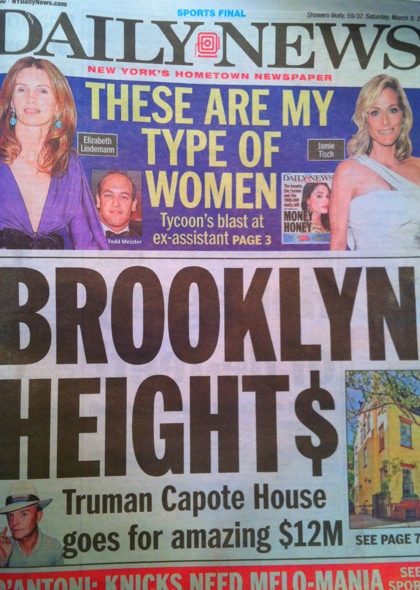 February House Update: Times Gives It a Rave
75 Clinton Sold For $50.8M To Invesco Before Shifting From Condo To Rental