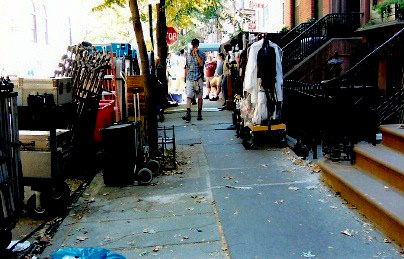 iVillage:Daily Blabber: Leo DiCaprio Had Sex in Our Living Room: Imagine watching a steamy sex scene on the big screen — Leonardo DiCaprio is seducing Vera Farmiga in her character’s apartment — but the only thing you can focus on is… your microwave.

That happened to two people that I know, Adam and Leah, whose garden-level brownstone apartment in Brooklyn Heights, NY was used as a set in the new flick, The Departed. The character Madolyn — a police shrink, who dated Matt Damon’s character but also slept with Leo’s — lived in their digs… and that’s where the movie’s steamiest scene took place.