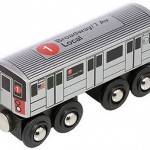 Navigating the subways won’t be child’s play this weekend. For the fifth consecutive weekend (and with two more to go), the 2 and 3 trains won’t be running to or from Brooklyn, so no service at Clark Street or the 2 and 3 platform at Borough Hall. Also, Manhattan bound A trains will be re-routed over the F line from Jay Street-Metro Tech to West 4th Street, and there will be no C train service in Brooklyn. North Heightsers going to Manhattan will have to hike to the Court Street station for the R or Borough Hall for the 4 or the 5, which again will be running to and from Brooklyn this weekend. For those returning from lower Manhattan, the A won’t be stopping at Fulton Street, but you can catch it at Chambers, a few blocks away, or use the 4 or 5 as an option.

There will also be complications for those traveling into Brooklyn. The F won’t be running between Jay Steet and 18th Avenue. F trains will be diverted onto the C line between Jay and Euclid Avenue. To get to 4th Street-9th Avenue, use the R. G trains won’t be running between Hoyt-Schermerhorn and Church Avenue, but free shuttle buses will run in its place. If you’re going to Park Slope, Prospect Park, the main Brooklyn Public Library, the Botanic Garden, or the Brooklyn Museum, you can take the 4 or 5 out to Bergen Street, Grand Army Plaza, or Eastern Parkway stations, but there will be no Manhattan bound trains stopping at these stations. So, to get back, you’ll need to take a 4 or 5 to Franklin Avenue and transfer there to a Manhattan bound train.