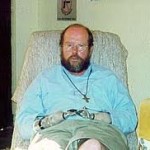 Father Michael Lapsley, who lost an eye and both hands during the struggle against apatheid in South Africa, and who founded the Institute for the Healing of Memories, will preach at the 11:00 a.m. service this Sunday, October 30, at the Church of St. Ann and the Holy Trinity, corner of Clinton and Montague Streets (enter from Clinton). The Rev. Nell Archer, of St. Ann’s, gives us these details:

Fr. Michael Lapsley was born in New Zealand and ordained in Australia. In 1973 he went to South Africa as a young Anglican priest where he became chaplain to both black and white students at the very height of apartheid oppression. He was elected National University Chaplain in Durban in 1976, the year of the Soweto uprising in which many black school children were shot and killed. Fr. Michael began using his public platform to speak out on behalf of students who had been shot, detained, and tortured, and was soon was expelled from South Africa. He spent the next 16 years in Zimbabwe as chaplain to the liberation movement in exile and in April 1990, three months after Nelson Mandela’s release from prison, he was sent a letter bomb from agents of the South African apartheid regime, disguised as religious literature. In the blast, he lost both hands, the sight of one eye, and was severely burned.

In 1993, after returning to South Africa, Fr. Michael became chaplain of the Trauma Centre for Victims of Violence and Torture in Cape Town and in 1998 he formed the Institute for Healing of Memories. The Institute offered crucial support to address the emotional and spiritual needs of survivors of apartheid and has since worked with victims of war, violence, and genocide in places like Rwanda, Burundi, Northern Ireland, Sri Lanka, and East Timor. In South Africa, the Institute now works with people with HIV/AIDS, prisoners, victims of gender-based violence, and refugees. Recently, it has begun training the staff of an agency in East Harlem, New York City, which operates a shelter for abused, disabled women.

Fr. Michael’s own experience of inner healing has helped him connect with people in countless cultures who experience systemic violence and personal pain. He challenges individuals and communities to move through a journey of healing towards forgiveness and reconciliation. He has been awarded an Honorary Doctorate by the University of KwaZulu Natal in recognition of his work in South Africa and around the world.