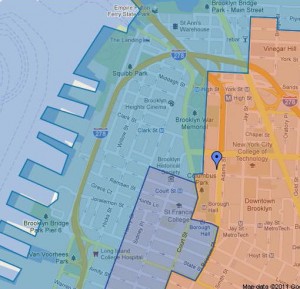 In an online news publication called “Capital“, a description of the current redistricting fiasco was provided.  Interestingly, the question of Brooklyn Heights Congressional representation was put to Assemblyman Hakeem Jeffries.  Assemblyman Jeffries is a rising political entity who has all but declared his intention to run against Rep. Edolphus Towns. 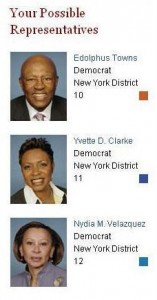 It is interesting to see how Congressional Districts 10, 11 and 12 come together in/and around Brooklyn Heights.  From the map above, there is a spot at the eastern end of Pierrepont Street, where one could stand simultaneously in three Congressional Districts.  Definitely not quite as good as the “four points” location out West, but not too shabby either.  Just another great thing about Brooklyn Heights!