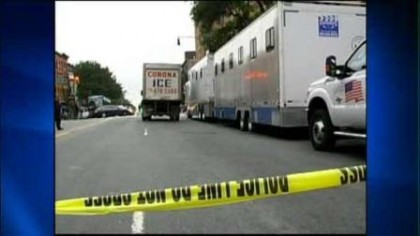 The NY Daily News reports on yesterday’s NYPD shooting on Atlantic Avenue. Cops were in pursuit of skell-in-waiting driving a stolen vehicle which became wedged between an ice truck and a vehicle being used by the TV show Pan Am which is shooting near Urban Outfitters at at 166 Atlantic.

An NYPD officer fired off a shot, the paper says, when he “pounded its butt on the roof of the stolen car as the driver put it in reverse and tried to mow him down.” The errant bullet entered a nearby apartment, nearly striking a mother and child.

NY Daily News: Schoolteacher Holly Morrison, 31, said she was holding her 4-month-old daughter, Pippa, on her lap in her second-floor Atlantic Ave. apartment when the bullet whizzed through the window.

“I was sitting on the couch with other moms and their babies when a bullet came through the window, above my head,” Morrison told the Daily News.