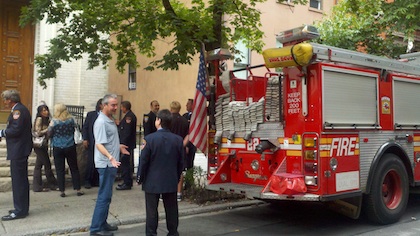 FDNY members attended 9/11 memorial services today at Church of the Assumption of the Blessed Virgin Mary on Cranberry Street today.

Our own FDNY heroes, Engine Company 205 / Ladder Company 118 “Fire Under the Bridge”, lost 8 men on 9/11/01 including 6 who died together in their firetruck under the rubble.

Engine 206/Ladder 118 is featured in a Spike Lee directed spot for State Farm honoring first responders. It features James Davis Jr. & The Children of New York Cit, including Brooklyn Heights resident Serena Biviano, singing a version of “Empire State of Mind”. The song is for sale on iTunes with proceeds going to benefit the National Fallen Firefighters Foundation. Watch the video after the jump.