Hurricane #Irene’s “wrath” has caused the East River to overflow onto Piers 4 and 5 of Brooklyn Bridge Park as this BHB reader photo from “Owen” shows. Residents of One Brooklyn Bridge Park, between Piers 5 and 6, were asked to evacuate as it falls in one of the city’s most flood prone areas, Zone A.

Meanwhile Tumblr user Jonathan Segura notes that flooding has begun at the park entrance in DUMBO. Well, it’s more like a photo op for some: 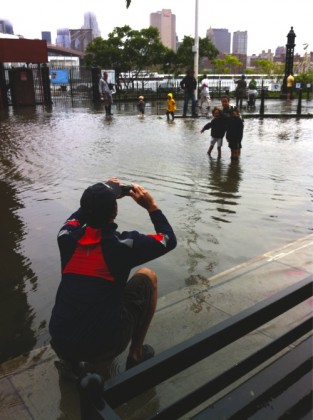