Yesterday evening the “Art of Brooklyn” festival at St. Francis College, 180 Remsen Street, had its auspicious opening. It began with a reception catered by local restaurants, during which those present could view the art works on display in the gallery, including Wilson (left) and Blue Stripes, by Bensonhurst native Marilyn Patrizio. Update: BHB readers are now given discounted admission to the Festival; see comments below. More photos, a video, and text after the jump. 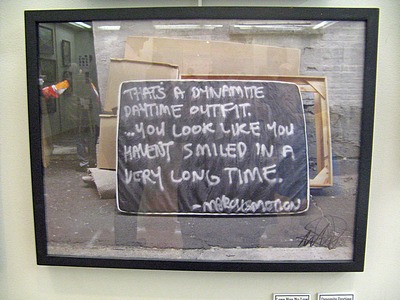 Marcus Motion, another Brooklyn native, “claims public space by converting relinquished objects and the barren walls of his surroundings into life-infused pieces with a distinct agenda”; for example, Dynamite Daytime. 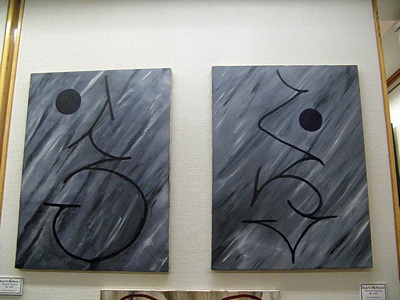 These two energetic non-representational paintings, Back to My Roots 1 (left) and 2, are by another Brooklyn-born artist, Ricardo Pantoja, who cites as influences Salvador Dali, Rene Magritte, and Inca art. 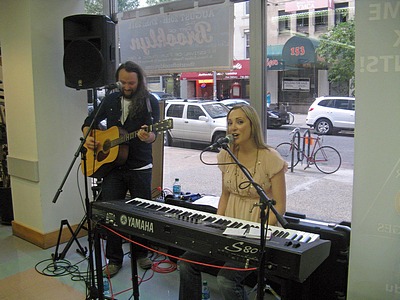 During the reception music was provided by Lisa Bodnar, accompanied by Dann Araque on guitar.

After the reception, we repaired to the auditorium for the premiere screening of a twenty minute version of BHB contributor Heather Quinlan’s If These Knishes Could Talk, which was well received. Among the highlights was her visit to Bronx native Joe Franklin (born Joseph Fortgang in 1926) in his repository of memorabilia, which looks like the definition of “archive” once given in a Shoe cartoon: “a dump without seagulls.” Heather’s film was bracketed by two very funny shorts, Mafia One and Two, directed by local comedic genius Danny Cohen.

After an intermission we saw a feature length movie, Apostles of Park Slope, directed and co-written by native Sloper Jason Cusato. As you can tell from the trailer above, this is not about the Park Slope of stroller-pushing yuppie moms, multimillion dollar condos, bike lane wars, and the Food Coop. It’s about remnants of the old, dare I say authentic Slope, inhabited by guys and gals with accents Heather would love.

The Festival continues through the week, with events every evening through Saturday, August 27. Heather’s Knishes will play again at a Saturday matinee on the 27th. Apostles will have two more screenings, on Thursday and Saturday evenings. Two more Danny Cohen short comedies, A Walk in the Park and Leader of the Pack, will be on the program Tuesday evening, which is comedy night. The complete schedule is here, and you can buy tickets here.