Hermia, Daisy and I had taken Pickering home to DUMBO and were on our way to Hermia’s house, a straight shot down Hicks Street. Police tape barred our entrance at Clark and the cop asked me for I.D. when I told him I lived here. I offered him plastic bags and Milk Bones and he let me pass with the warning I shouldn’t come out again.

Not come out again? I wondered. Was there a bomb scare? I could see activity another half block from my doorway but no steel trucks or flashing lights. I picked up my passport and the girlies and I were on our way.

By the time I got to the scene of the activity I had an idea of what had happened. Word travels fast between doormen and neighbors, even if the exact facts take another day to straighten themselves out. 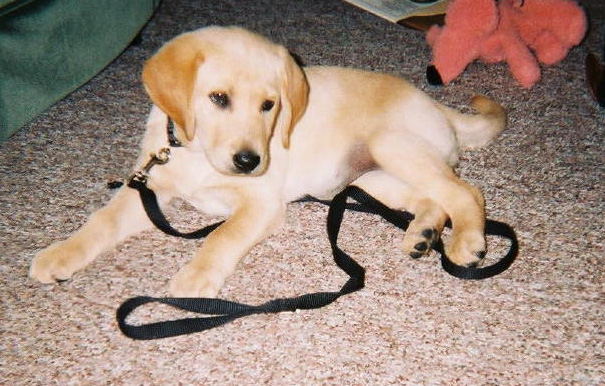 The exact facts aren’t important, but that grapevine is, at least insofar as it’s a grapevine I didn’t belong to five years ago, before I brought my eleven-week old greeting card Daisy home from Montana. There is nothing cuter than a Lab puppy and we made friends fast among her playmates and admirers.

There were specific moments in which I knew the fabric of my life had new colors woven into it. A Hillside acquaintance whose puppy was one of Daisy’s constant companions made a comment about another dog-owner, and a slow tear rolled down her face. We had shifted from not much into intimacy in a sentence. On a September Sunday, I went up to the owner of a roly-poly white Lab wandering around the Hill and commented that his dog could be Daisy’s mother. One of those frissons of recognition passed in the five minutes of conversation we had before he invited me home to meet his wife and have dinner.

This street-chat is still a marvel to me. I grew up on the fringe of a big Montana town in a time when there were no leash laws. You either drove a car or rode a bike to get somewhere and there was no such thing as not having a back yard. Pedestrians are still almost as rare as seeing adult residents doing more than stepping out to pick up The Missoulian.

That evening, Hicks Street in the block between Clark and Pierrepont was crowded and ambient with the sound of murmuring. Hermia, Daisy and I ran into Mitch, who was being walked by his owner’s nephew. I introduced myself and dropped the girls’ leashes and they were a happy snarling mess in a heartbeat. “Daniel gave you my number, right?” I asked as we untangled the dogs to go our separate ways. “Call me if you have any questions.”

Daisy is always lippy with Charlie, the flat-coated retriever who is one of the family who entered mourning that evening. She speaks fluent English but not Human, and her bark is deep and scolding. Charlie’s owners are gracious about her lectures and one night I dropped the leash so she could hash out her perplexity over Charlie on her own. Her bark turned to sniffing and kissing as she and Charlie circled each other, wagging their tails. His male owner nodded to himself and said, “It’s the leash, isn’t it, Daisy?”

Daisy wagged herself over to get her ears rubbed and Charlie wagged himself over to his butt rubbed. They each got a cookie and that was that. Whenever Daisy barked around Charlie and Mr. Barnett after that night, we looked at each other knowingly and rolled our eyes. Charlie has my right pocket fixed in his mind and it became a joke. We discussed Charlie’s upcoming summer haircut and Daisy’s shedding.

I associated Graham Barnett with Charlie so much that I wouldn’t have known him without his dog. He didn’t know my name either. Charlie’s a great dog, however. He adores his family and is nicely aloof with dogs like Daisy.

I hope Mr. Barnett knew Daisy adores lots of people and lots of dogs, and that I really try to curb her mouthy unpredictability. I hope Charlie and his family know that the fabric of our long block, that shares Wednesday night parking and warm nights on stoops, Halloween madness and kid and dog sleep-overs, has frayed at its delicate weave of personalities.

Dogs have given me close friends and a few foes. They’ve given me citizenship and an antidote to chronic social anxiety. They’ve given me respect for people and an automatic smiling fondness for those people who understand and love dogs. Graham Barnett was one of those.